NASA defines UAM as a safe and efficient system for air passenger and cargo transportation within an urban area, inclusive of small package delivery and other urban Unmanned Aerial Systems (UAS) services, which supports a mix of onboard/ground-piloted and increasingly autonomous operations. 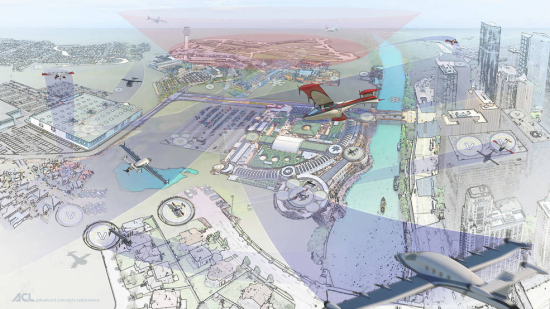 Under this agreement, Uber will share its plans for implementing an urban aviation rideshare network. NASA will use the latest in airspace management computer modeling and simulation to assess the impacts of small aircraft—from delivery drones to passenger aircraft with vertical take-off and landing capability—in crowded environments.

This is NASA’s first such agreement specifically focused on modeling and simulation for UAM operations.

At its research facility at the Dallas Fort Worth (DFW) International Airport, NASA will use the data supplied by Uber to simulate a small passenger-carrying aircraft as it flies through DFW airspace during peak scheduled air traffic. Analysis of these simulations will identify safety issues as these new aircraft take to the air in an already crowded air traffic control system.

The new space act agreement broadening Uber’s partnership with NASA is exciting, because it allows us to combine Uber’s massive-scale engineering expertise with NASA’s decades of subject matter experience across multiple domains that are key to enabling urban air mobility, starting with airspace systems.

As small aircraft enter the marketplace, NASA wants to ensure they do so safely, with acceptable levels of noise, and without burdening the current national air traffic control system. To this end, the agency is leveraging ongoing aeronautics research in areas including:

NASA has been working with other agencies, industry and organizations to test technologies that can help drones navigate safely beyond visual-line-of-sight.

These activities will generate the data necessary to support the creation of industry standards, Federal Aviation Administration rules and procedures, and other related regulations. NASA will make the research available to the broader UAM community.

I can not envision hundreds of these flying above major cities.

Adequate & safe low altitude traffic management of near future vertical take-off and landing aircraft will not be easy, even with proper automated anti-collision equipment. Mechanical and weather related accidents will happen, specially as traffic density increases.

What will be the impacts on people living/working in the immediate area and on properties?

I could see city to city transport away from airport Terminal Control Areas.

Too scary...Terror from above...now you're not even safe even from inside your house. Being run-over by terrorist on a side walk is scary enough, but having something like a plane strike at any time and from everywhere from the thousands of small planes flying above you at any given time...+is really scary.
If Uber, Tesla, and other autonomous driving cars can't master control in 2-dimensions, how on earth are they to be trusted operating in 3-D space with much higher risk of public harms?