Female drivers in the United States: From a minority to a majority?

When it comes to the types of vehicles on the road, energy consumption, and road safety, we might be better off with more women drivers than men. This is the case because women are more likely to purchase smaller, safer, and more-fuel efficient vehicles; women drive less; and women tend to have a lower fatality rate per distance driven.

Thus, a timely question is whether there has recently been an increase of female drivers on the road and therefore an increase in the aforementioned desirable attributes with which we associate female drivers. As a first step in answering this question, let’s examine the relative proportions of women and men with a driver’s license. In 1963 (as far back as licensing data from the US federal government exist), women constituted 39.6% of all drivers. Since 1963, this percentage has gradually increased. The first year in which female drivers became a majority was 2005. In 2016, women constituted 50.6% of all US drivers. 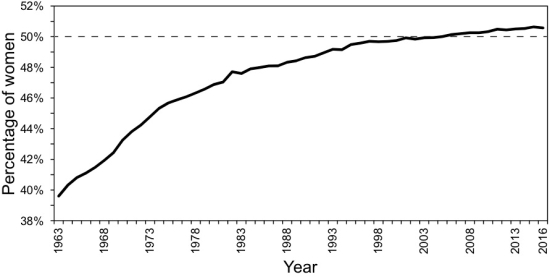 Although female drivers are currently a slight majority, the likelihood of them being on the road depends not only on their relative numbers, but also on the relative amount of driving that they do. Not surprisingly, men drive more than women, although the difference has been shrinking. Currently, the average annual distances driven are 13,356 miles for men and 9,838 miles for women.

Taking into account both the percentage of drivers by gender and the average annual distance driven by gender shows that currently women are still a minority of persons on the road—43.0% (but up from 23.8% in 1963).

Michael Sivak is the managing director of Sivak Applied Research and the former director of Sustainable Worldwide Transportation at the University of Michigan. The raw data for this analysis came from the US Federal Highway Administration.

Not universally true. Women in Texas tend to drive the biggest and most selfish gas guzzlers on the roads.