Bitcoin’s burgeoning electricity demands have attracted almost as much attention as the cryptocurrency’s wildly fluctuating value. However, estimating exactly how much electricity the Bitcoin network uses, necessary for understanding its impact and implementing policy, remains a challenge. In a Commentary in the journal Joule, financial economist and blockchain specialist Alex de Vries uses a new methodology to pinpoint where Bitcoin’s electric energy consumption is headed and how soon it might get there.

de Vries works at the Experience Center of PwC in the Netherlands and is the founder of Digiconomist (@DigiEconomist), a blog that aims to better inform cryptocurrency users.

His estimates put the minimum current usage of the Bitcoin network at 2.55 GW annually, which means it uses almost as much electricity as Ireland. A single transaction uses as much electricity as an average household in the Netherlands uses in a month. By the end of this year, he predicts the network could be using as much as 7.7 gigawatts—as much as Austria and half of a percent of the world’s total consumption.

To me, half a percent is already quite shocking. It’s an extreme difference compared to the regular financial system, and this increasing electricity demand is definitely not going to help us reach our climate goals.

If the price of Bitcoin continues to increase the way some experts have predicted, de Vries believes the network could someday consume 5% of the world’s electricity. “That would be quite bad.” 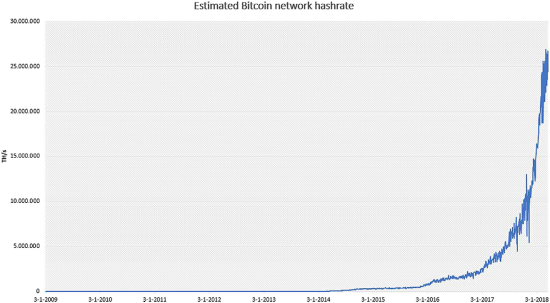 Bitcoin is dependent on computers that time-stamp transactions into an ongoing chain to prevent duplicate spending of coins. Computers in the network perform calculations continuously, competing for the chance, once every ten minutes, to be appointed to create the next block of transactions in the chain. The user of the computer that wins is awarded 12.5 new coins—a process known as “mining” Bitcoin. But all the time, even the users that don’t win are expending computing power.

You are generating numbers the whole time and the machines you’re using for that use electricity. But if you want to get a bigger slice of the pie, you need to increase your computing power. So there’s a big incentive for people to increase how much they’re spending on electricity and on machines.Alex de Vries

It’s figuring out when that incentive stops paying off that is at the heart of de Vries’s estimation method. Economic principles suggest that the entire Bitcoin network will eventually reach an equilibrium in which the costs of the hardware and electricity used to mine equal the value of the Bitcoin being mined. And that information can approximate the total amount of electricity that the network will use at said equilibrium.

Other researchers have used the fundamentals of this method before, but de Vries went further. He used production information about Bitmain, the biggest manufacturer of Bitcoin mining machines, to estimate both how much of a miner’s costs are associated with hardware rather than electricity and when this equilibrium might be reached. And while he does have confidence in his estimates, the problem with this method is that these manufacturers are extremely secretive.

Still, he believes that getting a good estimate is important in determining the sustainability of cryptocurrencies moving forward and in helping shape policy around them. Some states in the US have already started to put restrictions around Bitcoin mining.

But you need to base your policy on something. And I think that my method is important in that regard, because it’s very forward-looking. It’s focused not on the now, but on where we’re headed. And I think that’s something you really need to know if you’re going to draft policy about it.

I think everyone agrees on the minimum energy consumption. But the future estimate? That’s actually quite debatable. We don’t really have a common approach to getting to a future estimate of electricity consumption right now, which is why I am hoping to get this conversation started. I’m doing this research, but a lot of people should be doing it.

Mining #bitcoin without #renewableenergy is super selfish. Far better to use your processing power to solve disease.

If "they" could even move the mining machines to where the heat could be used (like in houses in cold places), it would be something, but most of the heat is just exhausted to the air wherever electricity is cheap.

It's true that Bitcoin mining uses a lot of energy. But so too does the world's financial system. It's just one of the ways of looking at the equation without considering other factors. When you take a full look at crypto mining with it's relation to other factors such as financial control for the people, you'll see that while it comes with some costs, those costs are likely justified.