Home About Contact RSS GCC Twitter Newsletter
Study estimates Bitcoin will use half a percent of the world’s electric energy by end of 2018
Fulcrum Bioenergy breaks ground on Phase 2 of Sierra Biofuels plant; 1st garbage-to-fuels project

DOE: 10 million metric tons of hydrogen produced annually in the US; 68% for petroleum processing

US annual hydrogen production is approximately 10 million metric tons (1.0E+10 kg), 68% of which is used in petroleum processing, according to the US Department of Energy (DOE). The Toyota Mirai fuel cell vehicle has a hydrogen tank capacity of approximately 5 kg (0.005 metric ton); thus, the annual hydrogen production works out roughly to about 2 billion Mirai tank-equivalents.

There are currently 1,600 miles of hydrogen pipeline in the United States and there are large hydrogen production facilities in almost every state. 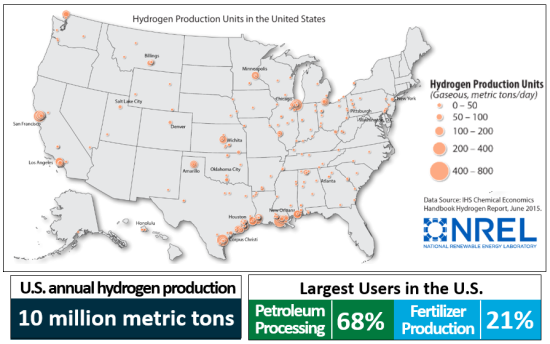 Of course, more cleaner H2 production + pipelines/distribution centers could be added, on an as required basis?

SO there is already quite a market for H2.
Question is - should they generate it by steam reforming of methane (as they do now) or from excess solar and / or wind energy?
Depends on the price of carbon (if you had one?), or mandates.

One of the best way to reduce CO2 emissions would be a progressive penalty for emitters and a tax credit or subsidy for CO2 emission reductions?

Since an effective system would require some kind of binding international treaty, it would not be easy to introduce unless it is done over a very long period (20+ years)?

The USA consumes on the order of 600 million metric tons (152 billion gallons) of gasoline per year.  1 kg H2 has energy roughly equivalent to 1 gallon of gasoline, so less than 7% equivalent of gasoline consumption.  There is also no network to distribute hydrogen beyond Gulf-coast refineries, and all of that hydrogen is produced by reforming hydrocarbons.

Electricity is already everywhere.  Why is it so hard to keep "greens" from being distracted by the shiny hypedrogen bauble dangled by the oil companies?