We’ve spent ten years developing, designing, testing, improving and demonstrating this new process so that it is now ready for commercial deployment. By converting waste into low-carbon transportation fuel, Fulcrum provides a real solution to the aviation industry’s commitment to reduce carbon emissions.

The feedstock used in Fulcrum’s process consists primarily of the organic material recovered from MSW. The prepared MSW is gasified using a ThermoChem Recovery International gasification system. During the gasification process, the prepared MSW feedstock rapidly heats up upon entry into the steam-reforming gasifier and almost immediately converts to syngas. A venturi scrubber captures and removes any entrained particulate, and the syngas is further cooled in a packed gas cooler scrubber. The cleaned syngas is then processed through an amine system to capture and remove sulfur and carbon dioxide.

The syngas then enters the secondary gas clean-up section that contains compression to increase syngas to the pressure required by the Fischer-Tropsch (FT) process. The end syngas product is very clean with zero sulfur content.

The Naphtha is recycled to the partial oxidation unit with remaining tail gas to be reformed to hydrogen and carbon monoxide. In the last step, hydrotreating, hydrocracking and hydroisomerization upgrading steps are used to upgrade the combined HFTL and MFTL products into jet fuel. 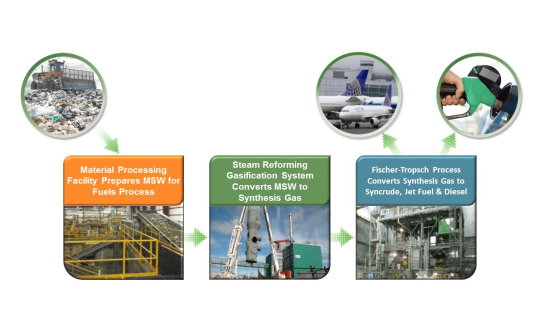 When the plant begins commercial operations in the first quarter of 2020, Sierra will convert approximately 175,000 tons of household garbage into more than 10.5 million gallons of fuel each year.

As construction proceeds on Sierra, engineering, siting and permitting activities are underway for the company’s next several projects to be sited near large US metropolitan areas where Fulcrum has already secured long-term supplies of feedstock, fuel logistics and fuel offtake agreements. Collectively, these future plants are expected to have the capacity to produce more than 300 million gallons of jet fuel annually.

It is more profitable to make liquid fuels than clean up the methane and put it in the pipes.

@SJC: I assume gasification of the waste converts a higher percentage to useful product than does the process of bacteria eating part of the waste and emitting methane. It would seem one of the big benefits of this is to reduce the solid waste stream going to landfills. It would be interesting to see a comparison.