The 2019 Chevrolet Silverado 1500 pickup truck will be offered with an all-new, technologically advanced 2.7L Turbo. Standard on LT and RST trims, the new engine delivers an SAE-certified 310 horsepower and 348 lb-ft (472 N·m) of torque—22% more torque than the 4.3L V-6 it replaces. Developed specifically for truck applications, the new 2.7L Turbo inline four-cylinder engine delivers peak torque from 1,500 to 4,000 rpm. 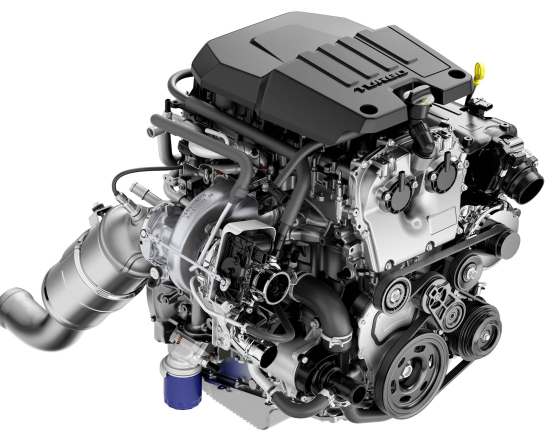 The cornerstone of the 2.7L Turbo is an innovative double overhead cam valvetrain that enables: 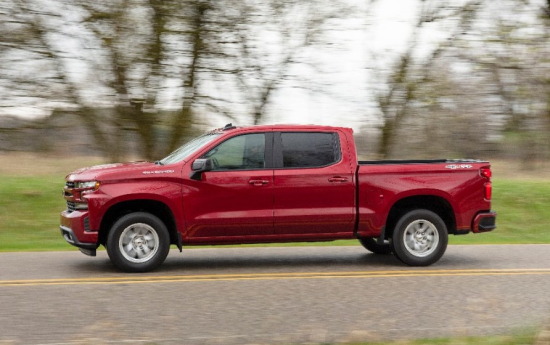 Additional engine technologies supporting the engine’s performance and efficiency include:

The new 2.7L Turbo engine represents a clean-sheet design for Chevrolet and was developed from the outset as a truck engine.

To help generate the strong low-end torque customers expect in a truck, it was designed with a long piston stroke of 4.01 inches (102 mm). The long stroke enables improved combustion and thus a higher compression ratio. Typically, a long stroke can increase the load of the pistons against the cylinder walls, generating more friction. That’s alleviated in the 2.7L Turbo with an offset crankshaft. It is slightly off-center of the cylinders, allowing a more upright position for the connecting rods during their movement.

To support the high cylinder pressures that come with turbocharging, the crankshaft and connecting rods are made of forged steel and the pistons are made of a tough aluminum alloy with a cast iron ring groove insert.

All elements of the 2.7L Turbo were designed for the demands of turbocharged performance in a truck environment, and the engine was subjected to the same rigorous durability standards as the Silverado’s proven V-8 engines.

The 2.7L Turbo’s valvetrain is GM’s first to incorporate variable lift, duration and Active Fuel Management to optimize performance and efficiency across the rpm band. It is a key reason the engine’s peak torque is available at only 1,500 rpm.

It’s like having different engines for low- and high-rpm performance. The camshaft profile and valve timing is completely different at low and high speeds, for excellent performance across the board.

The camshaft design alters the lift of the intake and exhaust valves. As the engine load changes, electromagnetic actuators allow a movable shaft containing different cam lobes to shift imperceptibly between high-lift and low-lift profiles.

Higher lift and longer duration allow more air to flow into the combustion chamber, so the system’s high-lift lobe profile enhances performance at higher rpm, while the low-lift profile optimizes efficiency at low- and mid-range speeds.

The 2.7L Turbo engine employs an advanced dual-volute turbocharger that elevates the performance and efficiency advantages of a conventional turbo, with quicker response and enhanced low-rpm torque production.

Rather than a single spiral chamber (volute) feeding exhaust gas from the exhaust manifold to drive the turbine on the turbocharger, the dual volute design has a pair of separate chambers with two exhaust gas inlets and two nozzles to drive the turbine. The design allows the exhaust pulses of the engine to be leveraged for faster spool-up and subsequent boost production, particularly at low rpm, where the effect significantly enhances torque output and drivability.

It works in unison with the engine’s integrated exhaust manifold/turbocharger housing, which splits the exhaust channels from the cylinder head so the exhaust flows through two separate channels in the turbo housing, based on the engine’s exhaust pulses. When complemented by the precision of the engine’s valvetrain, that separation leverages exhaust scavenging techniques to optimize gas flow, which decreases exhaust gas temperatures, improves turbine efficiency and reduces turbo lag.

With the charge-air cooler, the pressurized, heated air generated by the turbocharger is pumped through a heat exchanger before it enters the engine. That lowers the air charge temperature by about 130 degrees F (74 degrees C), packing the combustion chambers with cooler, denser air that enhances power production. The system achieves more than 80% cooling efficiency with less than 2 psi (12 kPa) flow restriction at peak power, contributing to the engine’s available torque production at low rpm.

Additional features of the engine include:

The all-new 2.7L Turbo will be built at the General Motors Spring Hill facility in Tennessee.

The 2019 Silverado goes on sale this fall. EPA fuel economy estimates and towing/payload capacities are not yet available and will be announced closer to launch.

Goes to show V8s are now mostly PR, when you can get better performance out of a 4 cylinder and blown air; and, with improved mileage and less emissions.

I hope stop start resets to "on" or a lot of hillbillies will keep it turned off just to be stupid.

Not a low friction engine from what I can gather, and tuned for high torque down low. Compared to the 5.3L, I predict lower real world efficiency and higher emissions overall (especially high in small particulates). GM wanted an aftermarket tuner engine so here it is. If GM had wanted an efficient truck, it would have built it as a strong hybrid with electric auxilliaries and a fully electric front axle (at the least). Is GM going to respond to FCA?

With Trump and the Republicans running the Government, look for the transition to clean energy and EVs to be delayed as long as they can make it happen and as long as the fossil fuel corporation can bribe them to act in their interests and not the people's best interest.