In emergency situations, first response teams often rely on voltage detectors such as Hotstick USA’s flagship product, the AC Hotstick, to sense the presence of dangerously high alternating current, or AC, electric voltages from a safe distance. The increase in electric vehicles on the road and solar panels on homes means high voltages could also originate from direct current, or DC, sources not accurately detected by existing technologies. 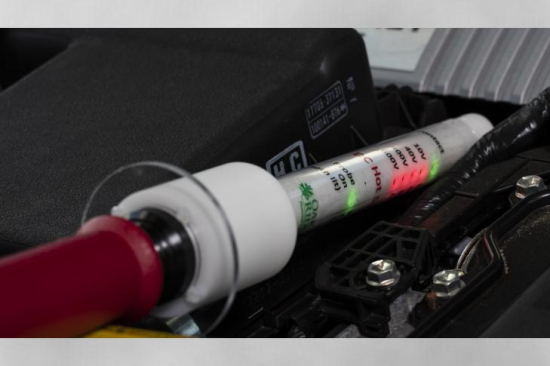 Emergency responders need to assess their safety before commencing rescue efforts. The DC hotstick detector will help them more accurately determine whether an electric vehicle or home is energized from a direct-current source for better, safer emergency assessments.

The DC hotstick prototype is a handheld device equipped with easy-to-read indicator lights that show whether the probe has established a connection and whether the electricity source is hot. In a crash involving an electric vehicle, for example, the car’s battery could still be connected and energized at a deadly 400 to 600 volts.

The probe is designed with a novel piercing tool to cut through plastic cable insulation that may obstruct contact with the vehicle’s battery and to indicate that a valid electrical connection is made. This ensures good contact for an accurate voltage reading in a situation where decisions must be made in seconds, Warmack said.

Making that contact is important. In preliminary work on the project, ORNL researcher Roger Kisner suggested a probe tip verification system that would ensure direct, galvanic contact was made.

One of the challenges for the project was dealing with DC voltage, which is more difficult than AC to work with, Warmack said.

In certain cases you can get electrical fields from DC, but it is easily interfered with by plastics and other kinds of materials. It’s more or less a science experiment to find DC unless you make direct contact with the conductor using a voltmeter.

Early results from field testing of the patent-pending technology have yielded a positive response, according to Warmack. He and his team plan to expand the functionality of the hotstick including collecting, sharing and storing voltage data.

After further development, Beckmann expects the DC hotstick to complement the company’s existing AC sensing technology, which is the market leading device, and satisfy the need expressed by many customers.

Inventors of this technology include ORNL’s Warmack, Ericson, Yarom Polsky and Roger Kisner.

The direct current voltage probe was designed under the sponsorship of the US Fire Administration, a division of the US Department of Homeland Security.