Salar de Uyuni in the Andes in southwestern Bolivia is the world’s largest salt flat (10,582 km2 / 4,086 mi2) and holds the world’s largest known deposit of lithium. The Bolivian state is creating a value chain to use the deposits of this raw material for industrial purposes. The state-owned company Yacimientos de Litio Bolivianos (YLB) has now selected the German company ACI-Systems as a strategic partner for this project. 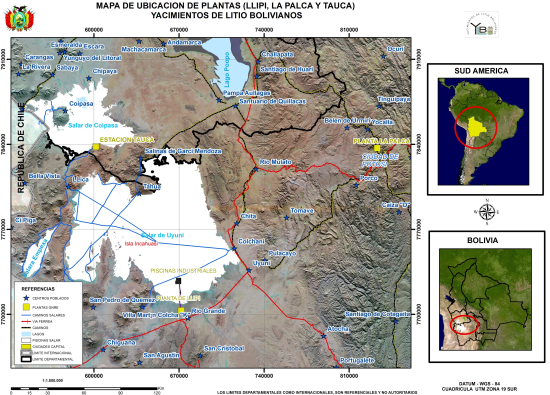 According to a 1978 study by the US Geological Survey, widely scattered brine samples from Salar de Uyuni show lithium values ranging from 80 to 1500 ppm. High values of 300-700 ppm are most prevalent in an area of about 2500 km2 in the east-central and southeastern part of the salar. A few brine samples in small areas in Coipasa and Empexa Salars have values ranging from 170 to 580 ppm Li. All the brines are essentially saturated with halite and are moderately high in sulfate (5000-15,000 ppm SO4) but low in carbonate (<500 ppm HCO3).

Potassium and magnesium values are relatively high, chiefly in the range of 2000-20,000 ppm, and the K:Mg ratio is about 1:1. The Li:K and Li:Mg ratios are relatively constant at about 1:20.

In 2013, COMIBOL completed the construction of a pilot plant for processing brines at the Salar de Uyuni, but commercial production was not expected until the fourth quarter of this year. Despite this, and other early work, the lithium desposit in Salar de Uyuni in Bolivia is currently largely untouched. 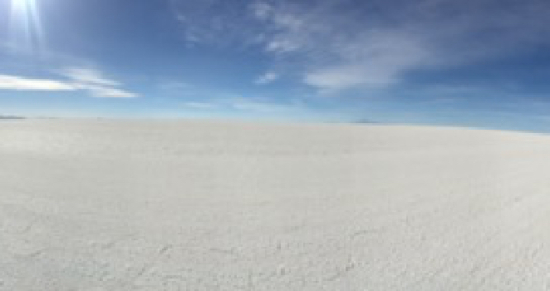 This situation is now going to change. The state enterprise Yacimientos de Litio Bolivianos (YLB), which is responsible for extracting, utilizing and marketing the raw material, was founded specially for this purpose. The project was divided into three phases.

Phase three involves establishing a value chain from extraction of the raw material to the finished product, in which Bolivia has a majority stake.

The industrialization phase involves extracting and producing raw materials from residual brine, developing production capacities, as well as manufacturing and marketing cathode material and battery systems in Bolivia. YLB invited eight international consortia to submit proposals to realize this step. One of them was the German company ACI-Systems GmbH.

The concepts submitted were intensively examined, evaluated and analyzed by YLB according to their specified criteria. After numerous iteration and discussion phases, on 20 April 2018 the state-owned company selected ACI-Systems as a strategic industrialization partner.

The company is a member of the ACI Group, which specializes in developing and constructing innovative and sustainable production solutions for photovoltaics and battery system manufacture, as well as in extracting and utilizing raw materials and materials for these branches of industry.

By entering into this Bolivian-German partnership, Germany will also gain access to the lithium. The decision in favor of ACI-Systems is therefore also of strategic importance to Germany and Europe.

The decisive factor was, on the one hand, the combined high level of technical expertise of the experts in the ACI-System team, reinforced by the cooperation with K-UTEC AG Salt Technologies from Sondershausen. On the other hand, integrated approach of the concept and project content were also convincing.

Potassium sulphate, magnesium hydroxide and sodium sulphate are extracted from the residual brine in addition to lithium hydroxide, and subsequently processed or marketed. Among other things, potential partners and customers were identified for this purpose.

Another important point is the transfer of knowledge through training and enhancing the skills of Bolivian employees. Environmental aspects were also pivotal. These include the environmentally compatible extraction of the raw materials, the use of renewable energies and the establishment of a decentralized power supply which, for the first time, will enable batteries and cathodes to be produced ecologically.

Joint venture. The next step, which is to be completed by the middle of this year, is to form a public-private joint venture between YLB and ACI-Systems in Bolivia, in which the Bolivian state-owned company will hold a 51% majority stake. The tasks of this company, which will be solved jointly, are to clearly define the areas of activity, as well as to draw up detailed business and environmental plans for the subsequently-founded project companies for extracting and processing lithium.

The differentiated conception of the technical and economic implementation of the project also falls within the company’s common field of activity. As project manager, ACI-Systems will be responsible for the final selection of technology and implementation partners, right up to the construction of the necessary production lines to ensure innovative, efficient and sustainable production.