Solaris will deliver 10 electric Urbino 12 buses to Hamburg public transport operator HOCHBAHN. Two of the commissioned vehicles will be supplied this autumn; the remaining ones will be handed over in September 2019.

The Senate of Hamburg has decided that, as of 2020, all buses bought by local carriers should be electric zero-emission vehicles. Thus the latest order for the battery buses Solaris Urbino 12 electric converges with the city hall’s policy and constitutes a milestone on its path to building an eco-friendly bus fleet. 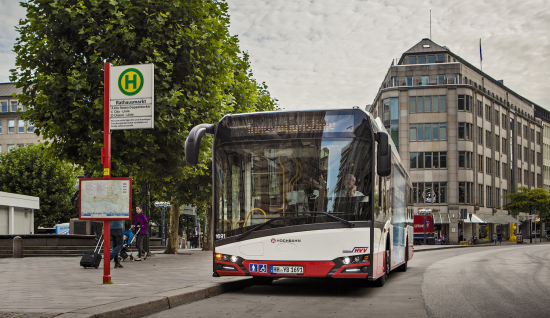 The ordered 12-meter vehicles will carry up to 70 passengers, of whom 25 can be seated. The buses will be recharged at the bus depot, using a plug-in charger. The vehicles will feature Solaris High Energy batteries boasting a total capacity of 240 kWh. An axle with integrated electric motors will constitute the drive unit. The bus will be fitted with LED lighting, both inside as well as outside.

Solaris has been delivering vehicles to the city since 2006, when it won a contract for conventionally fueled Solaris Urbino 12 vehicles. Two of the 18.75-meter Solaris Urbino electrics supplied in 2014 are electric vehicles with a hydrogen fuel cell. In Hamburg, Solaris’ electric vehicles serve on the 109 bus line, which the operator decided to dedicate exclusively to low and zero-emission vehicles.

These mid-size e-buses could be mixed with regular and articulated e-buses to suit traffic load.

These smaller e-buses are costly to operate where drivers are paid well over $100K/year.

Two of the commissioned vehicles will be supplied this autumn; the remaining ones will be handed over in September 2019.