The German Federal Ministry for the Environment gave the green light for a subsidized pilot project to conduct research and development on the electrification of long-haul trucks. The electricity supply for the heavy goods vehicles is provided by means of a pantograph from an overhead power line—the eHighway concept (earlier post). 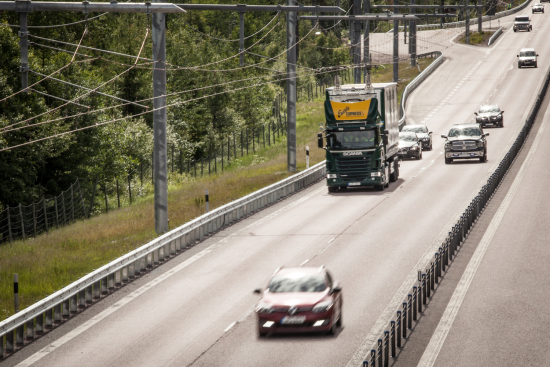 The two project partners involved—Siemens and Volkswagen Group Research—are sharing the tasks: Siemens is responsible for developing the pantograph while Volkswagen is providing the required hybrid trucks via the Group’s Swedish subsidiary Scania and is carrying out the accompanying research. Trial operations will be conducted jointly as from early 2019.

During the course of this research project, one objective will be to determine how goods traffic can be organized in a more climate-friendly manner, particularly over long distances. In Germany alone, heavy goods traffic results in CO2 emissions of 56 million tonnes per year. The extent to which electrification of routes for HGVs can bring about a reduction is to be determined within the scope of this project.

Both Siemens and Scania are already conducting trials on the supply of electrical energy for goods traffic. Now this technology will be gradually coming onto German public roads as part of a research project scheduled to run for three years.

It will involve two Scania trucks with varying degrees of electrification in the hybrid drivetrain taking part in test drives on three different trial routes in Germany. From the beginning of 2019, the first vehicle will be travelling periodically in traffic on public roads on sections of the A5 motorway to the south of Frankfurt, then later also on sections of the A1 motorway near Lübeck and on the B442 federal highway near Gaggenau, as soon as the overhead power line infrastructure there is complete. This research project represents the preliminary stage for a real field trial planned on a larger scale.

We are expecting the project to produce some useful findings on the potential for saving CO2 emissions through electrification and on the required energy demand of the trucks. These findings will then form input for the development of future generations of electric drives and the associated energy management.

The eHighway system is an economical and sustainable option for decarbonizing road transport. The field trials in Germany are an important step on the way toward realizing these systems. Along with the electrical drive components, the smart pantograph is the key part of the system: It connects the truck to the infrastructure along the highway. An efficiency of more than 80 percent is made possible by the efficient conductive energy transmission to the truck.

Separately, E.ON, H&M group, Scania and Siemens have formed a coalition to accelerate the decarbonization of heavy transport. The industry players are joining together to impact public opinion and policy with the aim to establish an optimal environment for mutually beneficial change in the transport sector.

The partners said that a systems approach will be required, and the coalition of companies forms a strong foundation with representatives from infrastructure provision, energy solutions and supply, vehicle manufacturing as well as retail with the transport buyer perspective.

The coalition of companies will continue to build knowledge, and identify high impact innovation and partnerships within their operations and respective ecosystems.

This looks like a good idea, especially if the trucks have say 30-50 miles battery capacity.
Then they can charge up on the long stretches, and detach from the lines for junctions, towns etc.
This would make it much easier and cheaper to build out the infrastructure.
Alternately, they could also have diesel generators but now it is getting a bit complicated.

If that isn't enough, bill by the kilometer for the fuel (pref. synthetic) required to bridge the distance.  It won't amount to much but the incentives to cut the consumption will be there.

Good to see this project being partnered by the top truck manufacturing companies. I suggest a different lane for the truck and heavy traffic for the safety of lite weight vehicles. Now it is easy for me to visit https://assignment-helpers.co.uk/ website and hire writers for my assignments.