The California Air Resources Board (CARB) approved a plan to mitigate statewide harm from more than 10,000 tons of smog-causing pollutants released in the state due to Volkswagen’s (VW) use of illegal “defeat devices” in diesel passenger cars. The National VW Environmental Trust provides California with $423 million for this purpose. 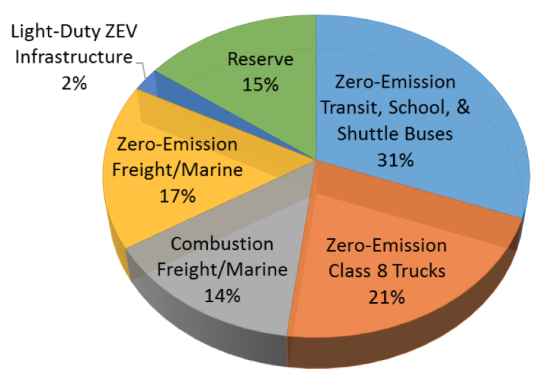 Over the next 10 years this plan will put in place not only tools to clean up VW’s excess emissions, but also to help achieve further reductions of smog-forming pollution for decades to come.

The mitigation plan approved by CARB will invest primarily in zero emission replacements for heavy-duty trucks, buses and equipment. There is also money to reduce emissions at freight facilities, marine projects and light-duty vehicle charging.

Senate Bill 92, passed last year, also requires that a minimum 35% of the mitigation investment benefit disadvantaged communities. As designed, the plan approved today invests about 50% of the available funds in those communities.

CARB staff estimates the proposed funding actions in aggregate will reduce about 10,000 tons of NOx over a 10-year period, which would fully mitigate the environmental harm caused by the subject VW diesel vehicles.

The plan will be submitted to the fund trustee before the first actual withdrawal from the trust fund.

Background. Beginning in model year 2008 VW sold about 600,000 2.0- and 3.0-liter diesel passenger vehicles with illegal software in the United States. 87,000 of those cars were sold in California. The illegal software, or defeat device, was specifically designed to operate emission control equipment when a vehicle is tested. The control equipment would then be shut off when the cars were actually being driven on the road. Excess NOx emissions are a major public health concern in California, because they are a key ingredient in formation of ozone (smog), CARB notes. More than 10 million Californians live in areas in extreme non-compliance areas for ozone. Those areas include the southern San Joaquin Valley and the Los Angeles Basin. Ozone is a contributor to asthma attacks, cardio-pulmonary disease and premature death.

The National VW Environmental Trust is intended to mitigate past and future excess NOx emissions from the subject vehicles. Under the terms of the two Consent Decrees, VW must pay about $3 billion into a national Environmental Mitigation Trust over a three-year period for specified eligible mitigation actions. California’s allocation of the trust is about $423 million.