The 1,150-km (714-mile) Trans Mountain pipeline system (TMPL) is the only pipeline system in North America that transports both crude oil from the oil sands and refined products to the west coast. (Earlier post.) The Trans Mountain Expansion Project involves building a new pipeline along the existing Trans Mountain Pipeline running from Edmonton, Alberta to Burnaby, British Columbia, and expanding the capacity of the terminal in Burnaby.

This expansion would increase daily capacity from 300,000 to 890,000 barrels, while improving market access to the US Pacific Coast and Northeast Asia. 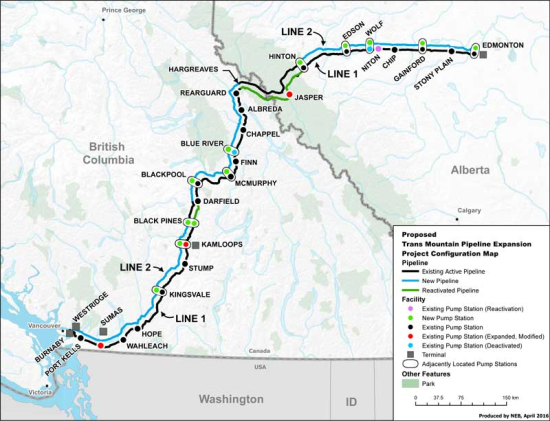 The project faced significant opposition from environmental groups, resulting in significant delays; Kinder Morgan had set a 31 May deadline to decide if it would proceed with the expanded line.

As part of the agreement, the Government has agreed to fund the resumption of TMEP planning and construction work under the ownership of a Crown corporation. The Government will guarantee TMEP’s advances under a separate Federal Government recourse credit facility until the transaction closes.

The Government emphasized that it does not intend to be a long-term owner of this project. Canada will work with investors to transfer the project and related assets to a new owner or owners, in a way that ensures the project’s construction and operation will proceed in a manner that protects the public interest, the Government said.

The Government will extend federal indemnity to protect any prospective new owner from costs associated with “politically motivated” delays. The province of Alberta will also contribute to get the project built. Alberta’s contribution would act as an emergency fund and would only come into play if required due to unforeseen circumstances. In return, Alberta will receive value commensurate to their contribution, through equity or profit-sharing.

The parties expect to close the transaction late in the third quarter or early in the fourth quarter of 2018, subject to KML shareholder and applicable regulatory approvals.

Our government believes that the commercial agreement we have reached with Kinder Morgan is the best way to protect thousands of good, well-paying jobs while delivering a solid return on investment for Canadians. This is an investment in Canada’s future.

Background. The Trans Mountain Expansion Project was originally proposed as a way to deliver more Canadian oil resources to international markets. Twinning the existing Trans Mountain oil pipeline and expanding the Westridge Marine Terminal would increase the capacity and allow producers to receive a better price for their products. The original Trans Mountain Pipeline was built in 1953 and continues to operate today.

On 29 November 2016, the Government of Canada granted approval for the Trans Mountain Expansion Project. Earlier, on May 19, 2016, following a 29-month review, the National Energy Board concluded that the project is in the Canadian public interest and recommended the federal Governor in Council approve the expansion, which it did. In addition, the British Columbia Environmental Assessment Office issued an environmental assessment certificate, allowing the Trans Mountain Expansion Project to proceed.

Kinder Morgan Inc., owner of the Trans Mountain Pipeline and the Trans Mountain Expansion Project, had been advancing the pipeline project, on a commercial basis, for several years. The company had obtained all the necessary approvals and permits required to proceed with the project and has done so in full accordance with Canadian law.

However, due to the political uncertainty around the project’s future, Kinder Morgan felt unable to proceed as planned, and in April 2018 decided to suspend all non-essential spending on the project.

Without Fed Government intervention, construction of this pipeline would have been delayed by another1 0 to 20 years?

Building this pipeline is akin to feeding a destructive monster; the tar sands area has been devastated; and, to use government funding is unbelievable. What are they thinking?

They are thinking they can sell a LOT to Asia.

With one large pipeline already (or soon) feeding the USA market + another existing pipeline feeding Eastern Canada (up to Montreal QC), this trans mountain improved pipeline is strictly for export to Asia.

Refineries east of Montreal will continue to use imported oil from many places.

The idea is to export as much (or more) oil as we import.

US oil production rose above 10 mbpd in February 2018 and now has reached over 10.7 mbpd at the end of May for an increase of 700,000 bpd which is more than the increased capacity of the TMPL. Gasoline produced from oilsands may take more energy to produce , but if it is being used in highly efficient Chinese/ Japanese hybrids as opposed to American trucks or SUV's doesn't that more than balance things off?

Personally, I think the government's plan to buy the pipeline is questionable on economic grounds because of great uncertainty how the markets for oil will unfold in the future, but as long as there continues to be a demand for oil, why shouldn't Canada be able to participate just as Norway does?

Note that oil production in America nearly doubled under the Obama administration. If he was truly trying to do something about climate change shouldn't he have done more to suppress the rise in production?

Oh wow, Canada sux! Trudeau isn't our friend, it seems. Best they could do it use it for renewable fuels as everything goes electric. What a shame for taxpayers.

Meanwhile, somebody must produce enough oil to feed all those gas guzzling heavy SUVs and Pick ups in USA and Western Canada?

The pipeline isn't for American pickups, it's for China and the rest of Asia.

Oil from tar sands is currently $20 to $30/barrel cheaper than the average international price for crude oil because of limited customers.

Local (B.C./Alberta) native people are interested to actively participate ion the financing of all or part of that pipeline extension.

Hope that they would join with the Fed Government and get them on board instead of against.