Milk & More, Britain’s largest milk delivery service has purchased 200 electric StreetScooters (earlier post). The £6.5-million (US$9.1-million) investment in the StreetScooters makes the business one of the largest operators of electric vehicles in the country. 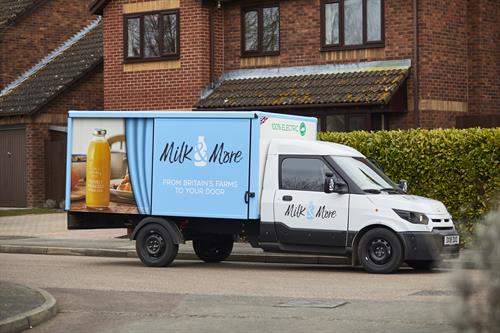 The new electric fleet is the first of its kind in the UK and represents the latest step as the brand continues to transform its operation in 2018. Milk & More is also the first UK company to operate the StreetScooter EV van, which is currently only used in Germany by Deutsche Post. (StreetScooter is owned by Deutsche Post DHL Group.)

Noise reduction is a key customer benefit of the new delivery vehicles and a very important one, given that many of the milkmen and women deliver to customers’ homes mostly by 7am.

The StreetScooters have a 905 kg payload and an eight-meter cube box, enabling Milk & More to carry 860 pints of milk at a time, as well as an extensive range of locally sourced products from bacon and bread to cereals and juice. The new floats have a 40 kWh battery pack supporting a range of up to 75 miles. Economical to run, in the first month of operation, Milk & More has seen a 90% reduction on operational fuel costs, versus the outgoing diesel vehicles.

The StreetScooters are all left-hand drive, enabling milkmen and women to get in and out of the milk floats on the curbside. Milk & More is likely to add to the 200 StreetScooters it has already purchased as it seeks to further increase its fleet of electric milk floats later in the year.

Seriously?
First of its kind?
30 years ago almost the whole UK fleet of milk floats was electric. At best, this is a back-to-the-future moment.

It was that recent?

We used to have battery milk floats when I was a boy.
See the episode "Speed 3" of Father Ted (NvSFW) for reference.
But it is a good application as it it very stop/start and the routes are quite short.

Hi EP,
Yup. My 19 year old remembers us getting our glass milk bottles delivered. The switch to diesel van in the noughties was one of the reasons we stopped having our milk delivered.
If this story pans out, I may go back to using the milkman.

Using electric vans however does not offset the enormous impact milk production has on the environment (water use, land use, manure problems, CO2 and Methane emissions, etc). Better to stop drinking cows milk, (your not a baby cow are you?), which will have a way bigger impact. Or they could start distributing plantbased "milks". Then it would be a real win.

Dairying is part of who we are.  Milk and cheese are our heritage, for hundreds of generations.  Milk has much less impact per calorie than beef does, and allows grassland to produce human food.