Dearman has launched a partnership with UK retail giant Marks & Spencer, as the retailer seeks to reduce carbon dioxide (CO2) emissions from its chilled deliveries. M&S will lease a dual compartment Dearman Hubbard transport refrigeration unit (TRU), on a refrigerated semi-trailer, to be operated out of its Hemel Hempstead depot. 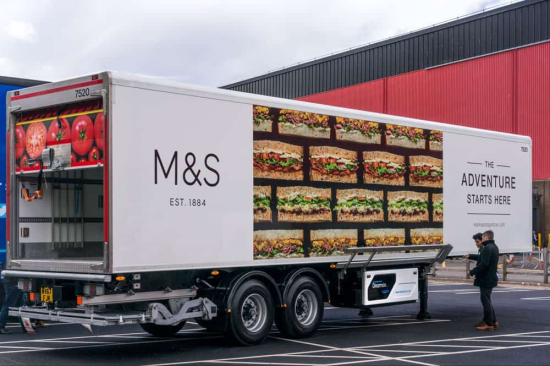 Dearman’s liquid nitrogen-powered engine (earlier post) is zero emission. The technology will replace diesel-powered secondary engines used to power (TRUs), which are used to keep food cold on the road. 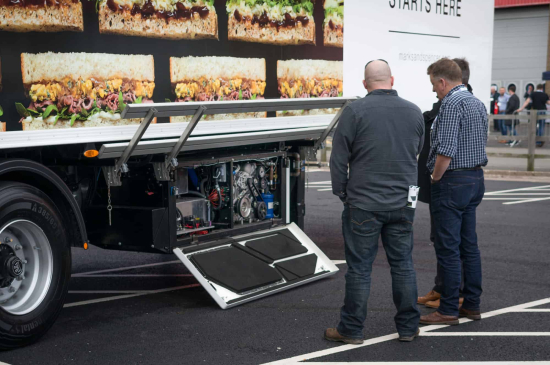 Compared to a conventional diesel-powered TRU, a Dearman Hubbard system has the potential to cut CO2 emissions by up to 95%. The Dearman TRU also eliminates NOx and PM, the emissions of which from a diesel TRU are many times higher than those of a Euro VI truck propulsion engine.

As a result, replacing a diesel TRU with a Dearman system could reduce the truck’s total engine emissions by more than 70% for NOx and more than 90% for PM. Since the Dearman TRU is zero-emission, it would qualify to operate in cities planning to regulate the use of diesel.

Because the Dearman TRU is powered by expansion rather than internal combustion, it is also markedly quieter than a diesel unit. It will meet the 60 decibel (dB(A)) limit under the PIEK standard (the PIEK-standard has been adopted in several countries including: Belgium, France, Germany, Netherlands & UK), which many local authorities adopt to regulate night-time deliveries. This means it can be used out-of-hours without disturbing neighbors or breaking any local regulations. Studies have suggested that delivering at night, when there is less congestion, can reduce fleet CO2 emissions by up to 30%.

M&S has a strong record with liquid nitrogen TRUs; it led the way with hundreds of Polarstream trailers 20 years ago, and has taken on 15 Frostcruise units in the last four years. Last year saw M&S use more than one million liters of liquid nitrogen.

M&S’ ambition, in partnership with Dearman, is to quantify the costs and environmental benefits of Dearman’s technology before leading to a nationwide roll-out.

M&S’ last 10-year sustainability plan already saw it become the world’s first and only carbon neutral major retailer. It now plans to go even further in cutting its carbon emissions and in June 2017 launched its new sustainability plan: Plan A 2025. The retailer has more than 1,000 stores across the UK and 60% of its UK turnover is from food sales.