Toyota Motor is introducing a mid-lifecycle model change for the AYGO, its successful A-segment entry in the European market. In 2017, AYGO was amongst the top sellers of the A-segment with more than 85,000 units sold, and a segment share of 6.6%.

Launched in 2005 for Europe, the first generation Toyota AYGO was designed to attract young, urban-based customers, and to bring a greater sense of playfulness to the Toyota brand. AYGO was not only Toyota’s first model in the compact city car segment, but also the result of a new joint-venture with PSA, with the cars specifically developed for Europe and produced at the new TPCA (Toyota Peugeot Citroën Automobile) factory in Kolin, Czech Republic. 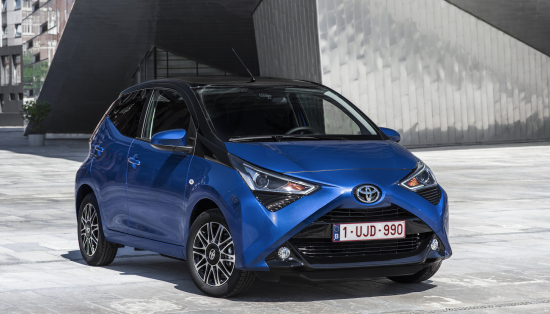 Along with design and content changes, the new AYGO features a more efficient powertrain with improved performance and handling characteristics to make it even more fun to drive.

With my 14 years of experience in being a Chief Engineer for joint venture projects, I know the importance of sustaining modernity during a vehicle’s lifecycle. So when we started development of the second generation AYGO in 2012, I already had in mind the visual changes and innovations I wanted to pursue for this mid-lifecycle model change.

From the start of the development, it was clear that we had many big challenges on our hands, since the outgoing model was still very well thought of by A-segment customers thanks to its strong exterior design and fuel efficiency. But we also had to take into account the increased number of competitors which make the A-segment an even more challenging environment. Based on this, we wanted the new model to look and feel like a new car, while focussing on three pillars to enhance AYGO’s DNA: re-evaluate the exterior design, make the car quieter and more fun to drive, and lower the total cost of ownership by making new AYGO even cheaper to run.

Through significant improvements to the 1.0-liter, 3-cylinder engine –such as adding exhaust VVT and twin injectors- we are now able to offer A-segment customers the best combination of performance and best in class fuel efficiency, in-line with AYGO’s DNA of ‘fun and efficient’. Thanks to these changes I can confidently say that new AYGO is the most responsive car in its segment, while keeping its green credentials.

The 1.0-liter, 3-cylinder engine was extensively revised and we improved the combustion efficiency through the adoption of a new dual fuel injector system. The compression ratios have been increased and friction within the engine was reduced. A new throttle body motor and ignition coil were adopted and, last but not least, we made changes to the cylinder head and block, the piston design and the EGR system.

By applying all these changes we were able to make new AYGO’s powertrain compliant with the latest Euro 6.2 regulations and reduce CO2 emissions by 5 g/km across the entire model range. This is a tremendous achievement for such a small engine that was already very efficient. 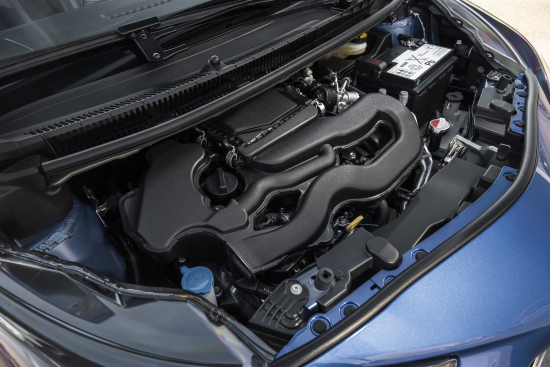 The cylinder head benefits from a new dual fuel injector system, enhancing combustion efficiency. The shape of the intake port has been changed to achieve optimum intake tumble flow. As a result, combustion efficiency is further enhanced, improving both fuel economy and exhaust gas performance.

The shape of the exhaust port has been changed to increase its size, decreasing pressure within the exhaust manifold. This not only contributes to enhanced torque delivery throughout the engine speed range, but also improves fuel economy.

A VVT mechanism has been added to the exhaust camshaft, improving fuel efficiency and exhaust gas performance. Furthermore, the optimization of the valve spring characteristics and the addition of a diamond-like carbon coating to the valve lifter reduce friction to further enhance fuel economy.

Within the cylinder block, the shape of cooling passages between cylinder bores has been optimized to improve cooling efficiency. This achieves superior anti-knock performance while contributing to enhanced fuel economy and exhaust gas performance.

The shape of the combustion chamber has been optimized, increasing the engine’s compression ratio from 11.5:1 to 11.8:1. Both piston and piston ring friction have been reduced through the resin coating of the reshaped piston skirt, and the addition of a diamond-like carbon coating to the piston ring top section.

An Exhaust Gas Recirculation (EGR) cooler system has been added, enhancing the cycle efficiency of the EGR system to further improve fuel economy. A dynamic damper has been added to the right-hand engine mount to improve Noise and Vibration (NV) performance.

Finally, an improved balance shaft has been adopted to reduce vibration at idling speed.

x-shift. The x-shift is available as an option on new AYGO. This automated manual transmission has a fully automatic shift mode and no clutch pedal, using computer control to synchronize engine, clutch and transaxle for quick and precise shifting.

Selecting E (Easy Mode), M (Manual) or R (Reverse) allows the car to creep like a conventional automatic. In E mode, the system selects a suitable gear according to the accelerator pedal, vehicle speed and driving conditions.

New AYGO’s x-shift is equipped with the kick-down function standard to automatic transmissions. Moreover, it is possible to override the system temporarily by using the steering wheel-mounted paddles. Selecting M mode allows the driver to manually change gear via either the shift lever itself or with the paddle switches.

Driving Dynamics. Complementing the improvements to engine performance and efficiency, the new AYGO’s suspension settings have been changed and the steering software updated. Various elements of new AYGO’s proven MacPherson front and torsion beam rear suspension systems have been revised and fine-tuned to improve ride comfort with no detriment to handling agility and responsiveness.

The shock absorber damping force of both the front and rear suspension systems has been optimized to achieve superior handling ability and ride comfort, and a lower coil spring insulator has been added to the front suspension to further enhance ride comfort.

Noise, Vibration and Harshness (NVH). Added sealing and absorption materials to the dashboard, A-pillars, doors and rear deck have resulted in a marked reduction in NVH within the cabin across the full range of engine rpm.

The material used for the dash inner silencer has been optimized to enhance sound insulation and absorption. Its upper surface area has been enlarged and benefits from the addition of a caulking sponge.

The thickness of the front cowl louvre caulking sponge has been increased by 3 mm, and that of the air shutter and cowl separator by 2 mm, reducing engine noise and high speed wind noise.

The thickness of the front fender protector has been increased by 1.3 mm, reducing engine and road noise. A caulking sponge has been added to the fender garnish reducing the penetration of engine and wind noise through the gap between the fender panel and side member.

A clear demonstration of what can be done to improve ICEVs. At 61+ mpg and a low CO2 emission of 86 gr/Km and low vibration and noise, this high quality Toyota small vehicle may become a best seller.

It will give most HEVs a run for their money?

No mention about GPF. Thus, we can anticipate high off-cycle PM & PN emissions.

@Peter_XX
The engine is PFI.

It will be interesting to see if if Toyota D4-S (direct + indirect injectors) in some of their larger vehicles will need GPF for EURO 6d, I would guess they won't.

@DJ_D
No, it has both PFI and GDI (dual fuel injection). Anyhow, also PFI engines have high PM & PN emissions in off-cycle conditions, e.g. at full load or during cold starts at low ambient temperatures. I know, since I have carried out such tests. GPF is the only solution if you want a clean car.

Again, EURO6d-TEMP is tested with real driving emissions (RDE) with PEMS, so I don't understand what off-cycle conditions could be.

This twin injection is a little puzzling, no one mentioned that one of them is DI and nowhere is mentioned D4-S (Toyota's DI+PFI system). My guess is those two injectors are both in the intake port. Nissan has a similar solution and the say that "This reduces the diameter of the fuel droplets, resulting in smoother, more stable combustion. "