Seven-Eleven and Toyota entered into a basic agreement in August 2017 regarding considerations toward energy conservation and carbon dioxide emission reduction in store distribution and operation. Toyota has been investigating the use of newly developed fuel cell trucks and fuel cell generators, and the project will be implemented in stages starting in 2019.

The Seven & i Group is currently addressing five key issues, one of them being non-wasteful usage of products, ingredients and energy. Specifically, the Group plans to increase renewable energy use in stores to 20% and reduce CO2 emissions by 27% compared to FY 2013 by 2030. Seven-Eleven is taking measures to reduce CO2 emissions throughout its entire supply chain to meet its goals, focusing on renewable energy.

On 7 December 2017, Seven-Eleven opened the environmentally, user friendly Seven-Eleven Chiyoda Nibancho Store as a flagship of these initiatives. The second such store, the Seven-Eleven Sagamihara Hashimotodai Itchome Store, opened on May 22, 2018, with renewable energy accounting for 46% of the store’s electric power usage. Toyota technologies and systems that use hydrogen will be introduced in stores and distribution sites, with next generation stores further using renewable energy. Two small FC trucks are intended to be introduced within the Tokyo metropolitan region in approximately spring 2019, and operations next generation stores are expected to commence in approximately autumn 2019.

In the joint project, the two companies will investigate ways to procure renewable energy and use energy efficiently, aiming to shift the energy used in stores to renewable energy and low-carbon hydrogen. Rechargeable batteries and stationary FC generators—using a Mirai fuel cell stack—will be installed in stores and small FC trucks will be introduced for deliveries to reduce CO2 emissions. Performance, costs, durability, and CO2 reduction effects will be evaluated with the aim of promoting further deployment. 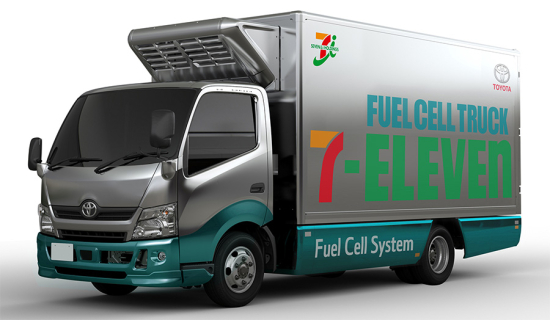 The in-store FC generator will generate electricity from hydrogen for store use. Boil-off hydrogen from the hydrogen station can also potentially be used. Efforts will be made to use hydrogen energy effectively, aiming toward the use of low-carbon hydrogen.

Rechargeable batteries will be installed for stable use of solar electric power, with the output being weather-dependent. When power is generated in excess of store demand, the batteries charge. When there is a shortage in power generated, the batteries discharge, raising the proportion of renewable energy use in the store.

End-of-life 10 kWh packs from hybrid vehicles will be used as rechargeable batteries; multiple units can be connected.

In addition to charging BEVs and PHEVs, bi-directional chargers can supply electric power from BEVs, PHEVs, and FCEVs to the store. When necessary, the charger can be operated with the BEMS to supply power from a BEVs, PHEVs, or FCEV connected to the charger to the store, maintaining store operations and contributing to local recovery during a disaster. Input/output during charging is AC 200V, 5 kW/DC 50―450 V. Power supply from a vehicle to store is 10 kW maximum.

The truck will be equipped with an external power supply function, for high-output, high-capacity electric power supply (maximum output of 9.8 kW and maximum capacity of 235 kWh) and can be used as a power source during a disaster.

While this is small scale in the context of Japans energy requirements it is appropriate to remember large scale generators are unable to meet the need for distributed aggregated supply.
I am heartened to think that schemes such as this will help eliminate proposals for massive fossil fuel sourcing of Hydrogen.
It is obvious that the current plans from fossil fuel industry is to supply 'clean,' 'low carbon'or 'zero emission' Hydrogen fuels to well heeled and gullible consumers and govt's well practised in deceptive behaviour.
Australia sees itself as renewable energy (Hydrogen) supplier to Japan if not many other countries but the gov't here supresses and talks down renewable generation while hard selling coal seam and shale options as well as subsidising the coal(and oil) industry with public money.