VW’s 1.0 TSI in the new up! GTI wins International Engine of the Year 2018 award in its category; Euro 6d-TEMP

Volkswagen’s 1.0 TSI in the new up! GTI1 has been named International Engine of the Year 2018 in its category. The 85 kW / 115 PS gasoline-fired engine is the first of its kind to be combined with a four-way catalytic converter and installed in the up!. It also comes with a gasoline particulate filter. 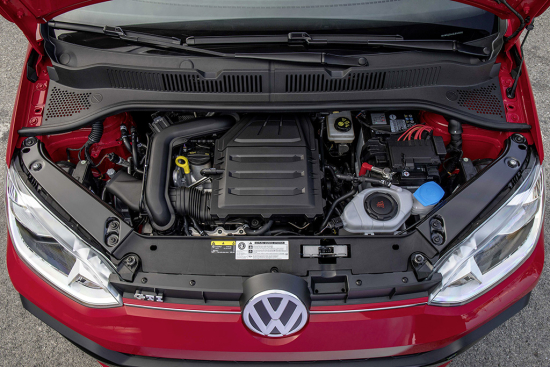 The 1.0 TSI version of the up! GTI—available since spring this year—is the latest addition to the EA211 range of engines. The 999 cm3 award-winning engine contains a turbocharger with electric wastegate actuator, an intake manifold with integrated intercooler and an exhaust manifold integrated into the cylinder head.

One key aim when developing the new TSI was to ensure the lowest possible emissions. This was achieved by innovations inside the engine, such as the new 5-hole piezoelectric injector; high injection pressure; newly developed turbocharger; new pistons; and innovative emission after-treatment system.

A core element of the emission after-treatment system is a new four-way catalytic converter with integrated gasoline particle filter (OPF), which reduces particle emissions by 95%. After flowing through the turbocharger, the exhaust gas is fed directly into the particulate filter. Due to its special coating, it works in parallel as a regular catalytic converter.

In the first component of the exhaust gas purification system carbon (C) is retained and converted during the regeneration phases into carbon dioxide (CO2). In parallel with this, the catalytic converter function reduces three further emission components from the exhaust gas: carbon monoxide (CO), nitrogen oxide (NOx) and hydrocarbon (CmHm). Catalytic reactions turn them likewise into CO2, and into nitrogen (N2) and water (H20). A second three-way catalytic converter in the underbody guarantees that the threshold specified in EU 6AG is complied with even under heavy loads.

The EU 6AG (Euro 6d-TEMP) emission standard includes fuel consumption measurements according to the new, realistic Worldwide Harmonised Light Vehicles Test Procedure (WLTP) and Real Driving Emissions (RDE) test. The measurements are made on a dynamometer and under real conditions on the road.

The fuel consumption and emission levels of the up! GTI were determined based on the new WLTP (Worldwide Harmonised Light-Duty Vehicles Test Procedure). The RDE (Real Driving Emissions) tests are also new. They check emission and fuel consumption levels in real operation on the road. Over the combined cycle the WLTP produces a consumption figure of 5.7 to 5.6 l/100 km (41.2 to 42 mpg US); the corresponding NEDC level is 4.8 l/100 km (49 mpg US).

Quite a big difference between WLTP and NEDC.

What a silly exercise and waste of billions..just go electric! I'd avoid VW stock.

Yeah, Tesla Redux, waste thousands of children in mines in Africa instead so that you... just can go electric! These children will get lots of silly exercise as well.