Recent moves by the International Maritime Organization (IMO) have signaled a strong determination by the sanctioning body to strictly enforce a tightening of marine fuel low-sulfur regulations, which will result in a period of huge upheaval in global oil markets, extraordinary margins for some oil refiners, and a potential doubling of fuel costs for shippers, according to new analysis from IHS Markit. 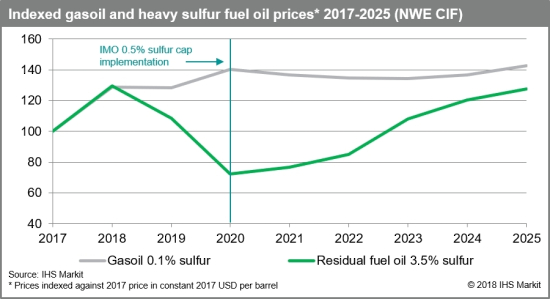 In 2016, the IMO confirmed that global refiners and shippers would have to comply with these new environmental regulations five years earlier than many anticipated, which sent tidal waves through two industries that typically take many years to adapt to such significant change.

Because the potential cost to shippers is so high and freight rates have been so low, many shippers opted to take a wait and see approach until they could determine if the IMO was serious about enforcement before committing to a pathway to compliance. It’s an understandable, if not costly, gamble, but I think they now have their answer based on IMO actions in recent months. As we at IHS Markit predicted from the beginning, the IMO is firmly committed to enforcement of these new regulations and therefore, compliance will be relatively high.

The level of compliance by shippers has been widely viewed as the one of the greatest uncertainties surrounding the implementation of the IMO’s new marine fuel regulations, and the compliance level has a significant weighting on projections for refined fuel prices, spreads and margins during the IMO 2020 disruption period,IHS Markit said. A high level of compliance would result in a high level of market disruption while weak compliance would curtail price impacts, to a degree.

The recent signals from the IMO have been clear, IHS Markit said. At a February 2018 meeting, an IMO-subcommittee announced a proposal to ban the carriage of non-compliant bunker fuel (fuel that exceeds the 0.50% sulfur limit) aboard ships that have not installed on-board ship scrubbers (exhaust gas cleaning systems), Barrow said. This proposal was approved by the IMO in April, and is likely to be formally adopted later this year. If the proposal is adopted, as expected, it will severely minimize the opportunity for ships to burn non-compliant fuel in the open seas.

In addition, Barrow said, progress has also been made by the IMO in 2018 on a number of other issues relating to the new regulations, including transitional plans, verification issues, control mechanisms, and the role of port states, as well as on the reporting of fuel-oil non-availability. These moves further reinforce IHS Markit’s view that there will be a high-level of enforcement and compliance for the new IMO regulations, Barrow said.

In another potentially crucial development, the insurance industry has begun to debate whether non-compliance with the 0.50% sulfur limit should result in ships being declared “unseaworthy”, therefore relieving the insurance provider of liability for any claim the owner might want to make, Barrow said.

Such a move would be a significant deterrent to non-compliance. Further, there is a large reputational risk of non-compliance for the biggest players in the shipping industry, who are often large publicly-listed companies with a need to maintain a strong corporate reputation.

Shippers basically have three paths to compliance for the new IMO regulations, IHS Markit said. Low-sulfur bunker fuels (primarily for smaller and medium-sized vessels), and liquefied natural gas (LNG) (primarily for certain classes of new builds) will be part of the solution. However, IHS Markit researchers expect that on-board ship scrubbers, devices that capture harmful pollutants from exhaust gas, will be a primary compliance pathway for existing large ships, which could continue to burn lower-cost, higher-sulfur fuels if a scrubber is installed.

Whatever compliance pathway they choose, shippers will face significant costs by having to install new equipment or switch to more expensive fuels.

IHS Markit estimates that about 20,000 ships account for around 80% of heavy fuel-oil bunker fuel use.

While more ships have installed or ordered scrubbers than when we first reported on this issue, the number is still minimal considering the size of the global shipping fleet. However, there are positive signs the industry is starting to get the message regarding the IMO’s intent to enforce these regulations, and shippers are ramping up on the installations of scrubbers.

As of August 2017, approximately 360 ships had installed scrubbers. As of May 2018, that number had grown to approximately 494 vessels, which is split into 237 new-builds, and 257 retrofits, Sayal said.

Based on the price spreads between low-sulfur bunker fuel and high-sulfur fuel oil during the scramble period, it will be very economic for many shippers to install scrubbers, IHS Markit said. The payback period for installing a scrubber on the largest vessels, Sayal said, would be two-to-four years past year 2022, and less than one year based on forecasted peak-price spreads in 2020.

According to the IHS Markit report, refiners will experience significant price impacts as they shift production to deliver more lower-sulfur fuels to the market and, at the same time, find a market for the higher-sulfur fuels they produce.

For refiners, there is now insufficient time to initiate large-scale ‘IMO-focused’ refining investments, with 18 months to go until the regulations go into force. However, refiners are continuing to announce relatively small-scale revamps as they do their best to shift production to deliver more low-sulfur bunker fuels to the market. Refineries, like ships, do not turn on a dime, so it takes significant investment and market demand to retool a refinery to deliver new supply.

According to the IHS Markit report, the primary challenge with the bunker fuel quality change for refiners (which requires sulfur content in marine fuels to be reduced from 3.50 wt % 0.5 wt %) is the disposal of high-sulfur residual fuel—not the production of low-sulfur bunker fuel.

When we account for all the supply and demand factors for the sour residual balance, including new conversion projects, capacity creep, scrubber and LNG capacity, as well as quality compliance, our bottom line is that a sizable portion of today’s fuel oil will be pushed into lower-price tiers, notably oil-fired power-generation plants. Refining capacity will exist in 2020 to produce the low-sulfur bunker fuel, but higher overall crude runs will be required.

The impact on refining margins will be fleeting but extremely significant, according to the IHS Markit research, with impacts felt most notably in 2020 and 2021. IHS Markit expects an unprecedented light-heavy crude oil price spread during 2020 to 2021, significantly affecting refinery feedstock costs. During these years, middle distillate prices (diesel, kerosene, jet fuel) will spike significantly while pricing for high-sulfur fuel oil (HSFO) will plummet.

As ship owners respond to the large-scrubber investment incentives, high-sulfur bunker fuel demand will rebound somewhat after 2022, although not to prior 2020 levels. Due to this increasing demand and addition of debottlenecking capacity for residue conversion, IHS Markit estimates price spreads will moderate within a few years, but the timing of the price recovery will be dependent upon a number of variables.

This is a beginning to try and clean up these gross polluters; proves once again it is folly to assume the shipping and fossil fuels industries will fix pollution problems. Government leadership is needed to define standards and pressure industries into compliance. Something Trump and the Republicans disregard.