The US Department of Energy’s Oak Ridge National Laboratory unveiled Summit as the world’s most powerful and smartest scientific supercomputer. With a peak performance of 200,000 trillion calculations per second (200 petaflops), Summit will be eight times more powerful than ORNL’s previous top-ranked system, Titan.

For certain scientific applications, Summit will also be capable of more than three billion billion mixed precision calculations per second, or 3.3 exaops. Summit will provide unprecedented computing power for research in energy, advanced materials and artificial intelligence (AI), among other domains, enabling scientific discoveries that were previously impractical or impossible. 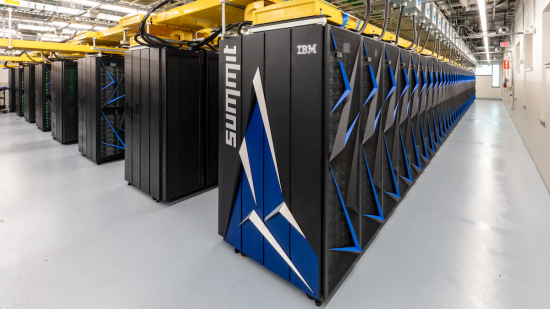 ORNL researchers have figured out how to harness the power and intelligence of Summit’s state-of-art architecture to run successfully the world’s first exascale scientific calculation. A team of scientists led by ORNL’s Dan Jacobson and Wayne Joubert has leveraged the intelligence of the machine to run a 1.88 exaops comparative genomics calculation relevant to research in bioenergy and human health. The mixed precision exaops calculation produced identical results to more time-consuming 64-bit calculations previously run on Titan.

In addition to scientific modeling and simulation, Summit offers unparalleled opportunities for the integration of AI and scientific discovery, enabling researchers to apply techniques such as machine learning and deep learning to problems in human health, high-energy physics, materials discovery and other areas. Summit will allow DOE and ORNL to respond to the White House Artificial Intelligence for America initiative.

Summit moves the nation one step closer to the goal of developing and delivering a fully capable exascale computing ecosystem for broad scientific use by 2021.

Summit will be open to select projects this year while ORNL and IBM work through the acceptance process for the machine. In 2019, the bulk of access to the IBM system will go to research teams selected through DOE’s Innovative and Novel Computational Impact on Theory and Experiment, or INCITE, program.

In anticipation of Summit’s launch, researchers have been preparing applications for its next-generation architecture, with many ready to make effective use of the system on day one. Among the early science projects slated to run on Summit:

Summit is part of the Oak Ridge Leadership Computing Facility, a DOE Office of Science User Facility located at ORNL.