Both air travel and the use of ride-hailing services such as Uber and Lyft are on the rise in cities around the world. Global demand for air travel is expected to double by 2035, and new airport infrastructure investments and modernization upgrades—costing tens of billions of dollars—are anticipated.

In a new study, NREL researchers focused on the key observability aspects of new modes and the rate of shifts in mobility patterns across airports in the regions of San Francisco, Portland, Denver, and Kansas City—all US DOT Smart City Challenge finalists.

For the first time in many years, if not decades, passenger transportation and aviation systems are on the frontline of innovation in moving more people faster, cheaper, and better—fueled in part by greater convenience and increased choices, among other things. We can observe and track these transitions through shifts in revenue streams at airports, with implications for the future of ride-hailing, parking, and car rental services in cities, as well as the physical infrastructure supporting each sector.

The revenue data associated with major transportation hubs, such as airports, signal critical shifts in the adoption of new mobility options, such ride-hailing to and from airports, as opposed to using personal vehicles. The increasing use of ride-hailing services has major implications for transportation, energy use, revenues, and future infrastructure.

The use of ride-hailing service companies, also referred to as transportation network companies (TNCs), continues to grow—comprising up to 18% of all passenger ground transportation to and from airports. 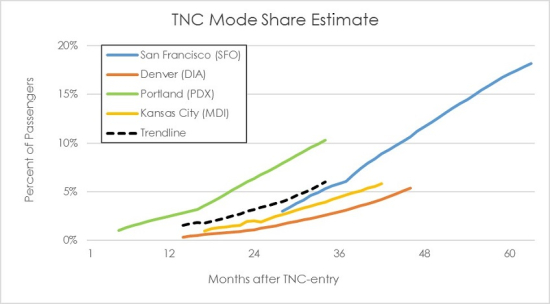 The percentage of passengers using ride-hailing services when traveling to and from four major US airports (San Francisco, Denver, Portland, and Kansas City) along with an average trend line indicating a steady increase over time in the percentage of passengers using ride-hailing services after the such services became available. The trend line indicates that at about 13 months, the percentage was approximately 2% with growth to approximately 6% within the next two years.

Additionally, the need for airport parking no longer directly reflects growth in the number of airport passengers. Rather, parking revenues per passenger peaked about 12 to 24 months after the introduction of TNCs, and steadily declined thereafter. Initial findings from the four airports considered in the study show an annualized declining rate range of 3% to 7%.

Continuing this trend would mean that airport parking demand could be cut in half in about 14 years. While this can be viewed as a declining revenue base, it could also enable airport growth without additional parking infrastructure investments, freeing up airport property for other uses. It also allows for new revenue streams—airports implementing a TNC fee for ride-hailing pick-ups and drop-offs are seeing an uptick, with Denver and San Francisco earning upwards of $600,000 to $2 million a month in new service-fee revenue.

Total parking revenue has peaked, and growth in parking demand is not tracking with growth in air travel, with ride-hailing being a major contributor to the shift. As a result, curb demand, rather than parking demand, is a factor in accommodating increased air travel.

The NREL researchers presented the study at the Intelligent Transportation Society of America 2018 Annual Meeting in Detroit.