Although Li metal anode are a promising enabler for high-energy-density next-generation battery systems, practical applications are severely hindered by low efficiency and potential safety hazards, largely due to the high reactivity of metallic Li toward liquid electrolytes.

Now, a team of researchers at Stanford University has demonstrated the use of nanodiamond thin film as surface protection for metallic Li; the lithium can be electroplated solely underneath the film and shielded from parasitic reactions with electrolyte.

The nanodiamond thin film possesses not only excellent electrochemical stability but also extremely high modulus for dendrite suppression. Because pinholes in the surface protection layer would undermine the uniformity of ion flux, the researchers proposed a unique double-layer structure to enhance the defect tolerance of the design. I.e., defects in one layer can be screened by the other intact layer. 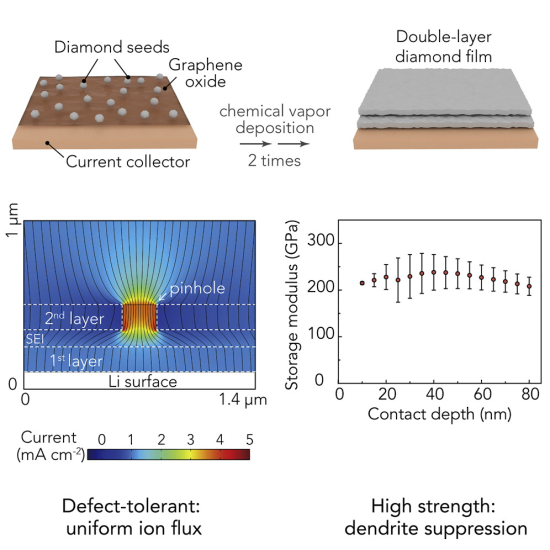 In an open-access paper on their work is published in the journal Joule, the researchers conclude that the nanodiamond interface enables efficient cycling of Li metal anode, paving the way for viable Li metal batteries in the future.

The stability of the interface between Li metal and the electrolyte is particularly critical for the safe and efficient operation of batteries with Li metal anodes, which have the highest theoretical capacity (3,860 mAh g−1) and lowest potential (−3.040 V versus standard hydrogen electrodes). Specifically, owing to its high reactivity, virtually any available electrolyte can be reduced spontaneously on Li surface to form a layer of solid-electrolyte interphase (SEI). However, this passivating SEI layer is generally too fragile to withstand the significant mechanical deformation of the electrode during cycling, leading to the formation of cracks. The cracks expose fresh Li underneath and locally enhance the Li-ion flux, which often results in dendritic Li deposition that could trigger internal short circuit and compromise battery safety. Moreover, the repeated breakdown and repair of SEI brings about continuous loss of both Li and electrolyte, giving rise to low coulombic efficiency (CE) and rapid capacity decay.

Interfacial engineering is among the essential means to answer the formidable challenges of Li metal anodes caused by their unstable SEI. This approach relies on the introduction of an artificial scaffold on the current collector to reinforce the spontaneously formed SEI layer, and ideally the two can move together during battery cycling without fracturing and side reactions. To fulfill the goal, exacting requirements are imposed for the interfacial layer design: (1) it needs to be absolutely stable against Li, which precludes most of the polymeric and inorganic coatings explored so far as the ideal candidates; (2) a high elastic modulus and compact structure are especially desirable, because the mechanical strength of the Li interface can play a key role in retarding dendrite propagation; (3) a certain degree of flexibility is required to accommodate the volume change of the electrode during cycling; (4) it enables homogeneous Li-ion flux without local hot spots; (5) the interfacial layer needs to be designed with low electrical conductivity and weak binding to the substrate such that Li deposition can solely take place underneath the film. Despite the past progress, a stable enough interfacial layer that can simultaneously meet all the above requirements is yet to be developed.

Herein, we present an ultrastrong interface for Li metal that is rationally designed to strictly satisfy all the above-mentioned requirements. The interfacial layer was constructed with high-quality nanodiamonds, a material well known for its highest bulk modulus, chemical inertness, and electrically insulating nature, all of which are ideal for Li metal protection.

The nanodiamond interface possessed an extremely high modulus of more than 200 GPa—the highest value of the real measurements reported so far among the artificial coatings for Li metal—which can effectively arrest dendrite propagation.

Due to the multifold advantages, the nanodiamond interface achieved the best performance in terms of Li metal cycling CE in both half-cell and Li-S full-cell configurations. We believe that our rational design can be a viable option for the stabilization of Li metal anodes and, at the same time, shed new light on the materials selection and structural design of artificial interfaces for Li metal anodes.

Use a solid electrolyte.

Can this technology be mass produced economically by 202X of so?

No, it is like graphene, the magic ingredient no one can mass produce.

MIT claims to have graphene mass production, we have not seen it in actual wide spread mass production for commercial EV battery use. A press release does not make a viable real world use.