UPS will have invested more than $1 billion in alternative fuel and advanced technology vehicles and fueling stations from 2008 through 2018. 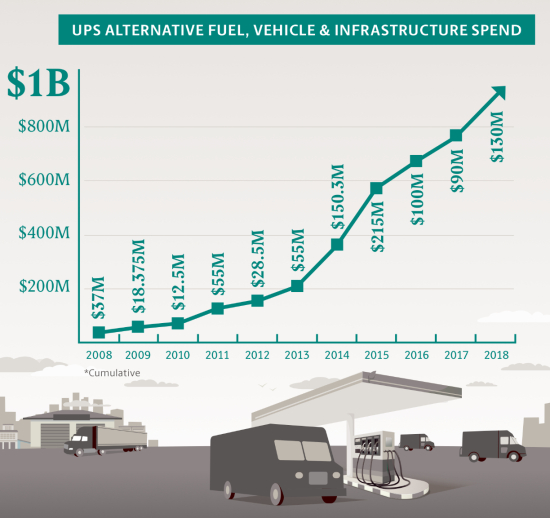 We strongly believe further investment in our natural gas fleet is a key element to help us achieve our long-term goals for reducing our CO2 emissions. We demonstrated the effectiveness of natural gas vehicles and fuel in 2017 by using 77 million total gallon equivalents in our ground fleet. UPS is a catalyst for wide scale adoption of natural gas vehicles.Carlton Rose, president, global fleet maintenance and engineering for UPS

Building CNG and LNG capacity is an important enabler for increasing UPS’ use of renewable natural gas (RNG). RNG yields up to a 90% reduction in lifecycle greenhouse gas emissions when compared to conventional diesel. Last year, UPS used 15 million gallon equivalents of RNG. The company is the largest consumer of RNG in the transportation sector.

The five new CNG stations will be in Goodyear, Ariz.; Plainfield, Ind.; Edgerton, Kan.; Fort Worth, Texas; and Arlington, Texas. Four hundred semi-tractors will be supplied by Freightliner and Kenworth and 330 terminal trucks by TICO.

UPS will deploy the new CNG vehicles on routes to utilize the new CNG stations as well as adding to existing natural gas fleets in other UPS locations including Atlanta, Ga.; and Salt Lake City, Utah.

UPS currently operates more than 50 natural gas fueling stations   strategically located across the US, and, outside the U.S. in Vancouver, Canada, and Tamworth, United Kingdom.

The initiative will help UPS reach its 2020 goal of one in four new vehicles purchased being an alternative fuel or advanced technology vehicle. The company has also set a goal of replacing 40% of all ground fuel with sources other than conventional gasoline and diesel. These goals support UPS commitment to reduce its GHG emissions from global ground operations 12 percent by 2025.

They save a lot of money versus OPEC fuel.