Audi is introducing the second generation of its A1 with the new Audi A1 Sportback. Even the basic version comes standard with a fully digital instrument cluster with a high-resolution, 10.25-inch display and a multifunction steering wheel. The optional Audi virtual cockpit with an extended range of functions presents comprehensive information in the driver’s direct field of vision. 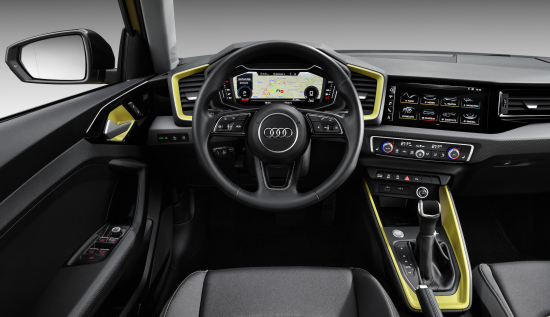 The Infotainment concept in the new A1 Sportback comes from the full-size class. The MMI radio comes as standard—it can be operated via the multifunction buttons on the steering wheel and the display in the fully digital instrument cluster. In the top configuration, MMI navigation plus offers a 10.1-inch MMI touchscreen, which blends seamlessly into the black glass look area.

In conjunction with Audi connect, MMI navigation plus offers A1 Sportback drivers functions such as hybrid route guidance—this calculates the route in the cloud, taking into account the entire traffic situation.

The driver assistance systems for the Audi A1 Sportback also come from the full-size class. They keep the compact car at the right distance from the car ahead, making it easier for the driver to maintain the lane and help him with parking.

The standard lane departure warning helps the driver to keep the car in the lane from a speed of 65 km/h (40.4 mph). Also standard is the speed limiter, which reliably prevents the A1 Sportback from exceeding a selected maximum speed.

Another standard feature is Audi pre sense front. The radar sensor recognizes critical situations involving other vehicles, crossing pedestrians or cyclists ahead of the vehicle. The system then gives an acoustic and visual signal to warn the driver. The adaptive speed assist, which is also radar-based, keeps the Audi A1 Sportback at the desired distance from the vehicle ahead. 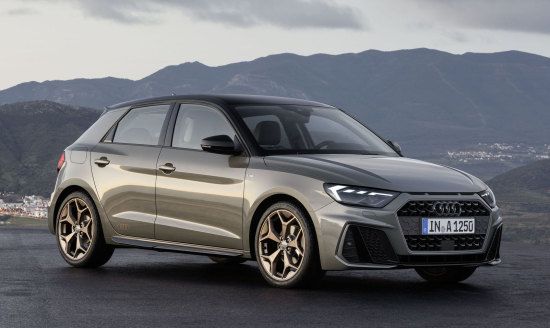 The new Audi A1 Sportback offers various systems to make parking easier. For the first time there is a reversing camera in addition to the rear parking system. The front ultrasonic sensors of the system recognize objects in front of the car and emit acoustic and visual warnings. The park assist system steers the A1 Sportback parallel and horizontally into parking spaces.

The A1 Sportback has grown significantly in length—with an additional 56 millimeters (2.2 in), it now measures 4.03 meters (13.2 ft). Its width has remained almost the same at 1.74 (5.7 ft) meters. The new-generation model—including aerial—is only 1.43 meters (4.7 ft) high. The wide track and short overhangs provide for a taut, sporty look. The wide, low-placed Singleframe grille and the implied side air inlets dominate the distinctive front. Below the edge of the hood are three flat slits – an homage to the Sport quattro, the brand’s rally icon from 1984.