Leading steel and mining company ArcelorMittal has begun construction of new premises at its site in Ghent, Belgium, to house a new installation which will convert carbon-containing gas from its blast furnaces into bioethanol. The technology in the gas conversion process, which utilizes microbes that feed on carbon monoxide to produce bioethanol, was developed by LanzaTech, with whom ArcelorMittal has entered a long-term partnership.

During gas fermentation, carbon-rich industrial gases such as the residues produced during steel manufacture, are transformed into commodity fuel and chemical products in a continuous process. 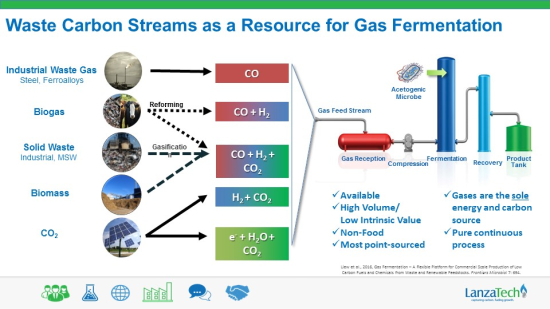 This is the first installation of its kind on an industrial scale in Europe and once complete, annual production of bioethanol at Ghent is expected to reach around 80 million liters (21 million gallons US), which will yield an annual CO2 saving equivalent to putting 100,000 electrical cars on the road. The new installation will create up to 500 construction jobs over the next two years and 20 to 30 new permanent direct jobs. Commissioning and first production is expected by mid-2020.

In May, LanzaTech and its joint venture partner, Shougang Group, a leading Chinese iron and steel producer, announced the successful start-up of a waste gas to ethanol facility located at the Jingtang Steel Mill in Caofeidian in Hebei Province. (Earlier post.)

The application of this microbial gas conversion system significantly advances ArcelorMittal’s carbon capture and storage (CCS) and carbon capture and utilization (CCU) capabilities and enhances steel’s role in the circular economy. ArcelorMittal’s long-term aspiration is to become a zero-waste business, with all materials used or generated during steel production recuperated, treated and reused in the production chain or becoming the raw materials for other industries.

This is the first application of a viable new business case where re-use of carbon is possible at large scale. We will achieve significant carbon reduction and we hope that this will lead us to a lower carbon economy. This new Carbon Smart technology illustrates ArcelorMittal’s commitment to transforming steel production and it will also further strengthen steel’s standing in the circular economy, particularly compared to other higher carbon metals like aluminium.

Single use carbon must become a thing of the past. In order to succeed in decarbonizing our economy, we will need the commitment of large companies and governments from around the world to ensure carbon reuse is part of the solution. This facility in Europe embodies the key principles of the circular economy and drives to a zero-waste steel production world. We are excited to work with ArcelorMittal and are grateful for the support of the European Commission.

ArcelorMittal will work with specialized partners to roll out this bioethanol technology. Funding was obtained from various sources, including the European Union's Horizon 2020 program, to carry out further research and development and scale up the project.

It is not bio because the carbon is fossil but reuse carbon to reduce emissions.

The advantage here, if there is one, appears to be that the bio-fermentation organisms are more tolerant of contaminants in the feed gas than conventional catalysts.  This reduces the amount and cost of gas cleanup required before it can be used, and perhaps widens the range of usable feedstocks (MSW is a new one on me).

The cost for this comes due in two stages:  first in the waste CO2 from fermentation, and last in the distillation step to separate ethanol from the growth medium.  This is energetically costly and represents a deadweight loss.  However, getting paid a tipping fee for the feedstock and possibly being able to use the gasification waste heat for the distillation step might well make the economics work.

H2 made from excess PV is going to cost way too much to be practical.  This is Audi e-gas in liquid form.

A 2017 presentation by Sekisui (Japan) and Lanzatech claims that the 2.2 Billion tons from Global Municipal Solid Waste represents a potential of 60 Billion gallons of Ethanol (this is MSW that is unsorted, non-recycled, and non-compostable that is going to landfills).