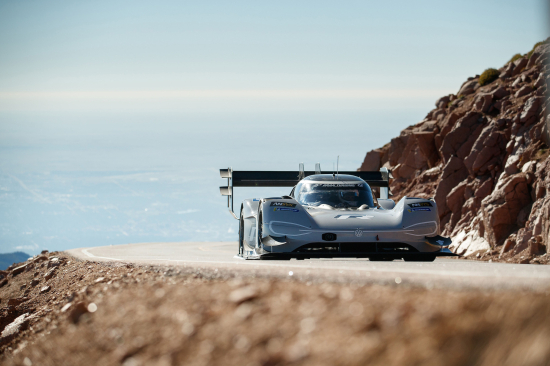 The I.D. R Pikes Peak is the sporty forerunner of Volkswagen’s I.D. family. Today, we saw what this technology is capable of. Every Volkswagen employee can be extremely proud of today’s result. I congratulate the team from the bottom of my heart. With a combination of outstanding engineering skills, passion and commitment, the team has managed to create a fantastic racing car in just eight months. The Volkswagen I.D. R Pikes Peak has now set the fastest time in the history of this hill climb, which spans more than 100 years—that speaks volumes for electric mobility.

—Dr. Frank Welsch, Member of the Board of Management of the Volkswagen Passenger Cars brand with responsibility for Technical Development

Volkswagen created an extraordinary racing car specifically tailored to the demands of the most famous of hill climbs: a combination of minimum weight, as much downforce as possible, and maximum power, designed to achieve the best possible performance. Including its battery cells, the I.D. R Pikes Peak weighs less than 1,100 kilograms.

When evaluating performance, Volkswagen employed simulation software to calculate exactly how to achieve the optimum in energy demand and performance for the record attempt on Pikes Peak.

In the matter of aerodynamics, the key was to compensate for the loss of downforce caused by the thin air on Pikes Peak. The result of this endeavour could be seen from afar: the flat, streamlined chassis and huge rear wing.

Volkswagen also struck out in a new direction when it came to charging technology—the goal being to charge the car as quickly as possible with minimum environmental impact. The time was defined by the regulations: In case of the race being suspended, it must be possible to completely charge the car in under 20 minutes. The electricity required was provided by generators at the foot of Pikes Peak.

Glycerol—a sugar alcohol—was selected as the fuel for the generator. A by-product of the manufacture of biodiesel, for example, Glycerol combusts with virtually no harmful exhaust fumes or residues. Glycerol itself is non-toxic and is even permitted as an additive in the food and cosmetics industries.

Volkswagen had strong partners on its side for the record attempt on Pikes Peak, in the form of Volkswagen R, ANSYS, Michelin, Integral e-drive and OMP. With Volkswagen R, the I.D. R Pikes Peak received a sporting seal of approval from the outset, which it more than earned on its record-breaking run, if not before.

ANSYS also made a vital contribution to the success of the project by providing support with the software simulations. Another key factor was tire maker Michelin’s years of experience on Pikes Peak, which allowed them to provide tire technology perfectly tailored to the demands of the hill climb.

The I.D. R Pikes Peak’s E-motors, which together generated 500 kW (680 PS), were achieved in collaboration with partner Integral e-drive. OMP put the icing on the cake with the featherweight racing overall for Romain Dumas, which perfectly complemented the lightweight design philosophy of the I.D. R Pikes Peak.

Why racing betting isn't developed at all? Wish it worked like with football. With all the usefull websites like https://livescores.biz , huge community and millions of fans.