Study: countries seeking to cut CO2 emissions must get a handle on city-level emissions

Countries seeking to meet Paris Agreement targets on CO2 emissions must get a grip on the amount of pollution produced at city level, according to a new open-access study published in Science Advances by an international team of researchers from Europe and China.

The researchers set out a framework for gathering and analyzing local information about how cities contribute to pollution levels, and show how these insights could be used to target climate mitigation initiatives most effectively.

Using China as a model, the team compared emissions data from 180 cities across the country, looking at the industrial make-up of each city, its socioeconomic profile, and the types of energy produced and consumed. 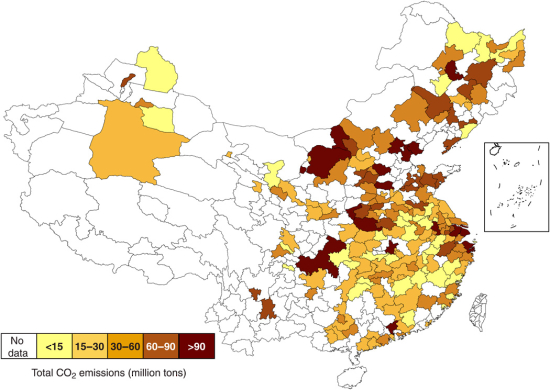 The researchers used the data to classify cities according to different levels of industrial development and worked out the potential for emission reduction amongst the different groups. Energy-producing cities, and cities with lots of manufacturing, have higher CO2 outputs than high-tech and service-based cities.

By modeling a range of different economic development scenarios, the researchers showed how policy-makers could understand which cities could make the biggest difference in terms of reducing emissions, and could make meaningful decisions about where to target reduction initiatives within a city.

For example, by identifying the worst factories or plants for emissions—the super-polluting units within an economic area—it would be possible to improve them with new, cleaner technology, cutting emissions without major economic disruption, he researchers suggest.

Prof Dabo Guan, professor of climate change economics at the University of East Anglia (UEA), led the research, along with Dr Yuli Shan from UEA’s School of International Development.

Everything practical that you would need to do to reduce emissions happens at a city level. You can demand that the country cuts CO2 production by 60%, but to do this successfully you need to have a good idea of how to cut pollution at a local level without devastating local economies. Rather than creating low-carbon pathways at a national level, we need a pathway for each city.

Our study shows that by targeting the top 5% of polluters in each city, it would be possible to reduce national emissions by 30%. That would be achievable without creating conflict between the need for economic growth and socioeconomic stability, and environmental protection.

The data used in the study was gathered by a team of researchers working on the Chinese Emissions Accounts and Datasets program (CEADS). Over the past three years, experts from the UK, USA and China have worked with local researchers to build increasingly sophisticated datasets on Chinese emissions.

The data we have published is not necessarily accurate in absolute terms and requires further verification by the public and local authorities, but it provides a benchmark on which local governments can build and use in their decision-making as they plan low carbon pathways to include actions that are both practical and feasible.

China was used as the model for the research because it is one of the largest developing countries in the world, tackling some of the biggest pollution challenges. The model could also work successfully for other countries, however, and researchers are already considering how to assemble data for developing countries in Southeast Asia such as Vietnam, Thailand and Laos.

The biggest emitter is usually the electric power industry.  Take it nuclear and you've generally knocked off something like 40% of emissions.

E-P is correct. However, much lower cost REs (with appropriate/enough storage) is a better economical solution, at least until such time as mass produced (much lower cost) smaller CPPs are built.

Alternatively, we could all reduce our e-energy consumption by -20% or more or enough for 2 small BEVs per family, but it may never happen until price per kWh goes up to $0.30 and more.

There are no RE-based schemes which can get to 80+% CO2 reductions absent storage, and storage costs enough to swing the cost back in nuclear's favor.

R.E. and storage costs are here to stay again we find the opportunities are mostly still evolving. Nuclear alone doesn't make any difference in that respect.
While I agree with the thrust of this report
On a country by country basis would question the contribution from forest removal and fires especially the avoidable components from development agriculture. Wildfires and hazard reduction are not so easily resolved.
I seem to remember that uncontrolled intentional fires related to palm plantations and clearing in Indonesia emitted as much 50 to 100% + of emissions reduction efforts that year.

Storage losses multiply the cost of indirectly-consumed RE, and the long-term losses are not going down.  Sure, we can get 85% back out of a lithium-ion battery... but a day's worth of Li-ion storage is prohibitively expensive.  We can get about the same back out of pumped hydro, but we don't have enough sites where we can build it.  Round-trip for power-to-gas-to-power is about 40%, and that's before transport losses for anything you try to move by pipeline instead of by wire.  Your cost ends up being ~2.5x the raw input energy cost, plus amortization and O&M on the storage stuff.

Nuclear is cheaper.  More to the point, the ecological footprint of nuclear will ALWAYS be smaller than the "renewables" just by its nature.

And animal agriculture is a greater contributor to climate change than all transportation combined (cars, motorcycles, trains, trucks etc.). Big impact with a small change (your diet).

I read in a Uni text book (since passed on) on bioremediation primarily of oil based but various other toxic substances describing naturally occuring organisms that would either colonise or could be introduced from a bio'warehouse' .
Great read but the authors went on to describe the regulation of nuclear waste into the Missisipi river. While many substances have limits on discharge from water treatment including sewage plants, the point made was that there were no standards for radioactive materials discharge and no tests were made even though it is the drinking water supply to 'more than a few'? people.
When the A.N.S.T.O representative was speaking at it'slicensing hearing for Lucas Heights, he/she was asked on the evacuation or notification plans in case of accident. The reply was "None , that would only frighten the local residents"
There were other clangers relating to reprocessing inn Argentina that played out as false and a string of errors in the build.
We have a substantial fly in well resourced and highly paid lobby group ( if I was a right wing politician I would call them 'Rent-a-crowd.) here in Aus currently for the nuclear waste disposal, nuclear power generation promoters and believe it or not the debate is being put up to the merit of Australia aquiring nuclear weapons.

This is an example of a string of poor regulation and a cover up denial culture or mentality and I would say that the whole nuclear industry has a very poor track record.

There is just no way you can trust these people when a rusted on atheist cannot say it better than borrow from the scriptures.

Acts 9:18 “And immediately there fell from his eyes as it had been scales: and he received sight forthwith

the authors went on to describe the regulation of nuclear waste into the Missisipi river. While many substances have limits on discharge from water treatment including sewage plants, the point made was that there were no standards for radioactive materials discharge

The authors flat-out lied.  There are many laws, regulations and limits on releases of radioactive material.  They appear to have strict controls on almost everything except so-called NORM, which contains e.g. radium precipitated in scale on oil and gas piping and is often disposed of as regular solid waste... or was.


no tests were made even though it is the drinking water supply to 'more than a few'? people.

That's just silly.  Radiation from all except the weakest sources (like tritium) is extremely easy to detect with very simple, cheap equipment.  It is nothing like trying to assay for chemical contaminants.  Drinking water ought to be cleansed of things like synthetic hormones, but nobody tests for them.

edit:" would either colonise or introduced from" culture.
Mississippi & Missouri river systems.

E.P.. The authors were not at all focused on the nuclear aspect the emphasis being on ground sites of the more common hazardous substances but also looked at some downstream aquatic aspects. The particular text and studies could be (are ) early investigations some sites studied were closed in the 50/s60/s so there had been considerable time elapsed which allowed longer term conclusions. I could only guess the date of publication and have no knowledge of test requirements as they stand today. It would seem to be an interesting line for investigation.

I will try and recover re read and report back.
Testing for radioactive materials I would defer to your understanding and assume it to be long well solved.

Recently we heard of and have seen methane sensors costing a dollar or three and data loggers capable of running on parasitic energy from natural and broadcast frequencies that can be read or downloaded via near field communication.
At the same time as that achievement we see the current administration cancel monitoring introduced by the previous admin for (especially those associated with hydrocarbons from oil?gas?) emissions that would have been of interest to the oil and gas industry as well as essential for quantifying site,state, country and global emissions.

I'm thinking that the test results quoted were those applicable to county water treatment plants. Definitely no tests required for radioactivity.
From recollection that included when they accepted standard discharges from nuclear (power) plants.
E.P. would likely be referring to regulations applicable to the N plants own monitoring .

Testing for radioactive materials I would defer to your understanding and assume it to be long well solved.

You better believe it is.  Testing for radioactive substances is so sensitive, the signal of the cesium-134 released from Fukushima was easily detected against the vastly larger emissions from decay of Cs-137 (still hanging around from bomb tests), the decay chain of natural uranium and the massive amount of potassium-40 in the oceans.  These isotopes differ enough in their decay signatures that they are easily told apart.

You'd get far more radiation from eating a banana (full of K-40) than swimming in the ocean around Fukushima.


Recently we heard of and have seen methane sensors costing a dollar or three and data loggers capable of running on parasitic energy from natural and broadcast frequencies that can be read or downloaded via near field communication.
At the same time as that achievement we see the current administration cancel monitoring introduced by the previous admin for (especially those associated with hydrocarbons from oil?gas?) emissions that would have been of interest to the oil and gas industry as well as essential for quantifying site,state, country and global emissions.

Blame "environmentalists" for overplaying their hand and destroying their credibility.

E.P. would likely be referring to regulations applicable to the N plants own monitoring.

I linked you straight to the horse's mouth, Arnold.  Read the regulations and report what they say, not what your lying sources have told you they say.

Here's a sample of what you didn't read for flavor:

In 2000, EPA revised the radionuclides regulation, which had been in effect since 1977. The revisions set new monitoring provisions for community water systems (CWS). This ensured that all customers of CWSs receive water meeting the maximum contaminant levels (MCL) for radionuclides in drinking water.

EPA also issued a standard for uranium, as required by the Safe Drinking Water Act (SDWA) Amendments of 1986. The current standards are: