Nel ASA has been awarded a contract for delivery of 448 electrolyzers and associated fueling equipment to Nikola Motor Company (Nikola) as part of Nikola’s development of a hydrogen station infrastructure in the US for truck and passenger vehicles.

Under the multi-billion NOK (1 NOK = US$0.12) contract, to be deployed from 2020, Nel will deliver up to 1 GW of electrolysis plus fueling equipment. The company reiterates a potential major expansion of the production capacity at Notodden to accommodate the contract order.

We are immensely proud of announcing this 1 GW electrolyzer contract with Nikola for the exclusive delivery of 448 electrolyzers and supporting fueling equipment as part of their groundbreaking development of a hydrogen station infrastructure across the US.

The multi-billion NOK contract is by far the largest electrolyzer and fueling station contract ever awarded. It will secure fast and cost efficient fueling of Nikola’s fleet of hydrogen trucks, delivering support to major customers like Anheuser-Busch, as well as a growing fleet of Fuel Cell Electric Vehicles. We look forward to working with Nikola on developing the world’s largest, most efficient network of low-cost hydrogen production and fueling sites. 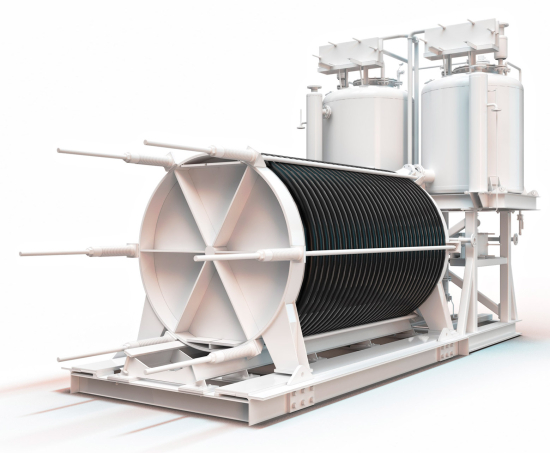 In late 2017, Nikola and Nel announced an exclusive partnership aimed at developing low-cost, renewable hydrogen production and fueling sites as part of a nationwide network of hydrogen stations, supporting Nikola’s vision of replacing the current fleet of diesel trucks in America with zero-emission hydrogen trucks.

Nel’s electrolyzers are efficient and reliable, making them a natural backbone for our station infrastructure. We’ll begin fleet testing the Nikola hydrogen electric semi-trucks in 2019. The first two stations will be installed in Arizona and California depending on permit timelines. The next 28 stations will be installed on each route outside of Anheuser-Busch’s Breweries or their distribution centers. Each station will produce 700 bar and will be compatible with class 8 trucks and consumer cars. This is an incredibly exciting time and we have now contractually set in motion the largest network of hydrogen in the world.

The contract includes an initial order for a pre-engineering package of around US$1.5 million, where Nel will develop a station design, including electrolyzers, specifically made for fast fueling of Nikola trucks.

Nel will continue to work, in collaboration with Nikola, to finalize the detailed station design and other technology elements to be deployed for the commercial stations. Nikola has already placed an initial order amounting to more than US$9 million for two demo-stations for which delivery will commence towards the end of 2018.

Early in May, Nikola announced that Anheuser-Busch has placed an order for up to 800 Hydrogen-Electric Powered Semi-Trucks. To support the Anheuser-Busch fleet of trucks, Nikola and Nel would need to deploy around 28 stations. This order volume alone will have a revenue potential for Nel of more than US$500 million.

The electrolyzer stacks will be manufactured in Norway and fueling equipment in Denmark. However, other supporting components and sub-systems will be sourced locally in the US to reduce costs and minimize transportation needs.

We’re looking at a total contract volume which is many times higher than the current annual production capacity at Notodden. While we have not reached any conclusions on an expansion to accommodate the order, we want to reiterate our plans to develop the Notodden facility into the world’s largest electrolyzer stack manufacturing facility, aiming at a cost reduction of around 40%.

Lithium-ion batteries are 80-90% efficient round-trip.  These trucks are going to eat a lot more electicity than equivalent electric trucks.

Since each Kg of H2 could/will go twice as far as with one (1) gallon of diesel/gasoline, those long range FC trucks will be more (twice as) efficient.

Of course, equivalent long range e-trucks will eventually do the same (or more) but with 10+ tons (1000+ kWh) of very costly batteries?

Water treatment plants put renewable methane into pipes, there can be on site Methane Steam Reforms with gas shift reaction at the location where the trucks are filled.

20% loss would be substantially higher than expected. Compression and storage plus stack losses will likely double those losses.
The cost and life of catalysts will be important but presumably this method will permit swap out and upgrade.
Solar pv installations are being suggested to prioritise hot water over grid export for economic reasons. Apparently it is preferred over solar thermal.
Those lucky enough to have larger pv available would often find BEV the better option and the economics might stack even if it meant some double handling thru a large(ish) stationary battery if the car was not co located in the daytime.

And when it's NOT available, what do you do?  If you have a hydrogen-dependent system, you have to have hydrogen regardless of the availability of unreliable energy.  In other words, the fallback is fossil fuels.  It always will be, because it can't be anything else.

Note that USD2.14/gallon is USD18.77/mmBTU.  This is roughly 5x the going rate for natural gas in N. America.  Hydrogen locks in natural gas consumption both for all stationary uses and also as the backup source of hydrogen.


Those lucky enough to have larger pv available would often find BEV the better option and the economics might stack even if it meant some double handling thru a large(ish) stationary battery if the car was not co located in the daytime.

Am I allowed to note here that this is what the grid is for?

Even if it uses e-energy more efficiently, heavy long range e-trucks and long range e-buses would need 1000 kWh to 2000 kWh of heavy/costly batteries to compete with FC trucks/buses.

The same applies to wireless electrified trains and ships and affordable extended range all weather vehicles.

H2 produced with interruptible clean REs can be stored for long periods when REs are not producing enough e-energy.

Alternatively, H2 can be transported from adjacent facilities by trucks and/or pipelines on an as required basis.

No need for hydrogen pipes nor trucks, make it at the point where the trucks/buses are fueled. Steam Methane Reformers and electrolyzers can be put in fuel yards with renewable contracts.

And where are you going to get the renewable methane for SMR?  Landfill gas and sewage digester gas are both scarce on the scale required and contaminated with difficult-to-remove chemical species that kill fuel cells (siloxanes especially but probably other things as well).

One of the reasons LFG and such are flared off is that the recoverable energy isn't worth the trouble of purifying them enough to use.  But in the interest of knowledge I once dug up figures on the gas production of the big landfill in King Co. WA and compared it to the fuel consumption at SEATAC.  This "vast" supply of "renewable" methane was pathetic compared to the thirst of the jets flying in and out every day.

Solar is and will remain the most abundant, interruptible, affordable, safe source of energy for the next 5 billion years or so. Suffisant, affordable storage is and will soon be available. Wind is another worthwhile alternative in many places.

With a total cost approaching $0.03/kWh, REs will move NPPs, CPPs and NGPPs out of the market by 2030/2040 or before in many places. Some NGPPs will remain as back ups. Most large NPPs will be phased out and not be refurbished. CPPs phase out will be accelerated.

Solar is and will remain the most expensive of all "renewable" energy sources, because it must be converted from photons to useful forms.  Wind and hydro are already converted to mechanical energy and only need capture.

Solar will never be able to compete against energy sources which do not require mass storage, unless it is subsidized and the competition is hobbled.  This is the "advantage" solar has over nuclear:  political.

Most Hydro plants have huge water reservoirs that can be used to store excess energy from other REs such as Solar and Wind. Start using Hydro energy as a variable filler to feed the grid whenever Wind/Solar energy sources are not producing enough.

If water reservoir go down beyond normal level, build more Solar/Wind production sites. In our area with lots of Hydro, well balanced/controlled grids, energy from REs sources would be fully (100%) used without batteries or other very costly storage units.

Almost never big enough to hold the full spring melt; the ones on the Columbia have to generate flat-out most springs in order to avoid overtopping the spillways

that can be used to store excess energy from other REs such as Solar and Wind.

No they can't, for two huge reasons:

Pumped storage in general is grossly inadequate to the task.  Consider trying to use Lake Erie as the lower reservoir of a continental pumped-storage system.  It has 25,667 km² of area and averages 19 m deep for a total water volume of about 488 km³ or about 488 billion tons of water.

And it would take ALL of Lake Erie to do it.  Real hydro reservoirs are puny compared even to Erie, the smallest and shallowest of the Great Lakes.  You are NOT going to solve this problem with pumped hydro, Harvey!


In our area with lots of Hydro

How many times do we have to tell you:  North America is NOT Quebec!

Hydro is currently using 29 large reservoirs including Lake Ontario and Lake Erie. We have no real needs to pump water back into those reservoirs but to use them as charged batteries and to drain them in a properly controlled manner to feed the grid, on an as required basis, when other REs (Solar/Wind) are not producing enough to meet the loads.

If the water level of all those 29 reservoirs is going down below acceptable normal level, install MORE Wind/Solar REs to rebalance the e-energy production capabilities/loads. The curent 95% Hydro VS 5% Wind could progressively go to 50%/50% or at least twice the current total production, enough to supply e-energy and/or clean H2 for 2+ clean vehicles per family + electrified trucks + buses + trains + ships + planes etc. Over 80% of all homes are already using clean e-energy from the grid for 100% of their needs.

Secondly, Hydro & REs production could be doubled + when and if required, by the end of the century or the next, as the local population goes from 8.5M to 17+M.

We have no intention nor obligation to feed USA with clean energy.