Hydro-Québec and the U.S. Army Research Laboratory (ARL) have used Cr, Fe and Si to improve the performance of olivine LiCoPO4 in cathodes for lithium-ion batteries.

In a paper in the Journal of Power Sources, they report that a substituted-LiCoPO4 in a half cell delivered a reversible capacity of 125 mAh/g at C/3 rate, with no capacity loss after over 100 cycles at 25 °C. The well-known capacity fade of LiCoPO4-based cathodes was almost completely eliminated by substituting Cr, Fe and Si. 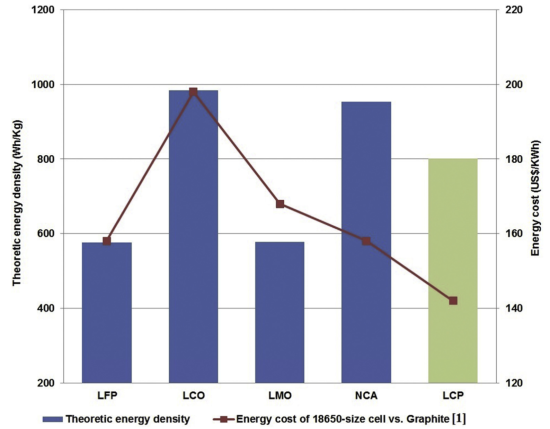 Compared with conventional 4-V cathodes such as LiCoO2 (LCO), LiNixCoyAlzO2 (NCA), LiMn2O4 (LMO) and 3.5-V LiFePO4 (LFP), LiCoPO4 (LCP) operates at 4.8 V (vs. Li/Li+) with a theoretic capacity of 167 mAh g−1. The higher voltage of LCP results in specific energy of ∼800 Wh kg−1, which is about 25% higher than that of conventional cathodes in lithium-ion batteries. Although Co is more expensive than the other transition metals, the energy cost of LCP is expected to be less than other commercialized lithium-ion batteries on the market due to the improved energy density.

LCP suffers from severe capacity fade due to the low intrinsic electronic/ionic conductivity, structural deterioration and electrolyte decomposition. A diverse range of synthesis strategies, such as planetary milling, microwave heating and spray-pyrolysis et al., were explored to yield smaller particles and/or composites, but the above-mentioned shortcomings and the electrochemical performance remain unsatisfied. Deposition of carbon coatings or precipitation of Co2P under high-temperature annealing in inert atmosphere produced a significant increase of over 105 in the electrical conductivity of LCP. In addition, electrolyte additives were also employed to improve the attractiveness of LCP. These two approaches, however, do little to stabilize the cathode material itself, or only protect the electrolyte from decomposition during cycling. In this work, substitution of Cr, Fe and Si, as well as the use of a carbon-coating, improved the performance of LiCoPO4.

The researchers attributed the high-rate capability to the Li vacancies and mobile hole polarons by Cr, Fe and Si substitutions, as well as a carbon-coating.

Combined with the merits of Fe, Cr dopants, strong covalent band of Si-O and uniform C-coating, it is reasonable to believe that defective Fe/Cr/Si-substituted LCP will be a promising next-generation high-voltage cathode for high-energy lithium-ion batteries.

They specify mAh per gram of CATHODE material. Now you have to understand how much mass of cathode is in a kg of battery. By the time you are done 100 mAh becomes 100 Wh per kg of battery mass.

This misleading mini step in energy capacity (+25%) at C/2 and other advantages could be interesting if mass production cost is reduced.

Time will tell if this approach is mass produced.

If your USB port were not working properly then from our tutorial you will learn that how to fix usb ports stopped working in some easiest way with the help of our tutorial in simple steps.