The Swiss company ecovolta is building a fully automated Li-Ion battery pack assembly plant in Schwyz with an annual capacity of 200 MWh. This will make it one of the largest such plants in Europe after its launch in September 2018.

The construction principle used by ecovolta enables the flexible mass production of prismatic and cylindrical battery types in a fully automatic process. At voltage levels of 12-600 volts, capacities of 10 Wh up to several 100 kWh can be realized. The energy density reaches 480 Wh per liter. 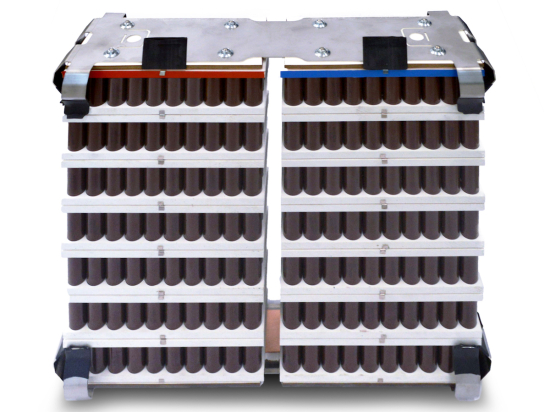 In conjunction with the battery management system (BMS) also developed by ecovolta, the batteries can be discharged without cooling with 8C and charged with 2C.

In addition to battery production, Schwyz is also developing a research and development area for battery applications with a focus on electromobility. Ecovolta combines the development expertise of various companies from Switzerland and Italy.

Our R & D team has been developing battery, electronics and drive solutions for over 15 years. Right next to production, they test battery systems and build complete drive prototypes along with power electronics. Torques, load curves and current peaks can then be measured on the engine test bench.

The battery lab, which also belongs to the R & D department, can test and document cycle numbers of storage, aging processes as well as the consequences of short circuits and mechanical destruction. A dedicated test bunker enables particularly secure tests if required. For the production as well as the in-house research and development department, ecovolta uses a total area of ​​around 7,500 m2.

Battery systems that are manufactured according to the construction principle used by ecovolta and equipped with the ecovolta-BMS are already being used in eMobility applications and in agriculture.

Ecovolta is a subsidiary of the Swiss ecocoach AG, which offers advanced building automation systems.

The Swiss market is much smaller than EU's, China's, Japan's, So-Korea's or USA's.

A few of those fully automated battery factories running 24/7 could certainly meet the local market. The total number could be increased to match requirements.

I wish it was clearer whether this group of co's manufactures at the cell level. I'm sure that cell manufacturing is not mandatory for their business model.