The crossover utility vehicle (CUV) share of light-duty vehicles has increased, largely at the expense of cars, despite increases in gasoline prices over the previous two years, according to the US Energy Information Administration (EIA). In each month since September 2017, sales of CUVs have exceeded those of cars, a class that includes sedans, hatchbacks, and sports cars. 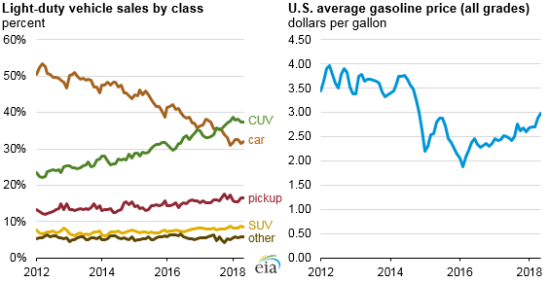 CUVs, which typically have ride height and interior space similar to truck-based sport utility vehicles (SUVs), are built on more fuel-efficient, car-based platforms and often have fuel economies that are only slightly lower than comparable cars. Vehicle sales shares for pickups, SUVs, and other vehicle types—which typically have much lower fuel economy than sedans and many CUVs—have remained relatively constant in recent years, with pickup shares showing comparatively modest gains.

Although CUVs and cars are built on similar platforms, CUVs often have slightly lower fuel economy than their comparable sedan counterparts (for example, the Toyota RAV4 CUV versus the Toyota Camry sedan), even when they are equipped with the same engine and transmission. However, the change in vehicle shares from cars to CUVs had less effect on fuel consumption compared with other historical shifts in sales, such as the shift from cars to SUVs in the 1990s and early 2000s.

The relatively small variability in annual fuel costs has not been enough to change purchasing trends in the same way that consumers exchanged low fuel economy SUVs for cars and CUVs in the peak of the recession in 2009. At that time, replacing a 20 mile-per-gallon (mpg) vehicle with a 30-mpg vehicle would save an annual 250 gallons when driven 15,000 miles, at a cost savings ranging from $500 ($2/gallon) to $1,000 ($4/gallon), according to EIA.

CUVs often have fuel economy ratings that are more comparable to cars than to the fuel economy ratings of SUVs or pickups. Also, as fuel economy increases, cost savings from fuel consumption reductions decrease. For example, a consumer who drives 15,000 miles per year using a 35-mpg sedan consumes about 429 gallons of gasoline annually, while a 30-mpg CUV traveling the same distance would consume 500 gallons, a difference of 71 gallons. That difference in gasoline consumption would cost $143 to $285 annually with gasoline prices in the range of $2/gallon to $4/gallon.

Confirmed CUV driver here.
At my age I have to be able to get in and out of the flipping car.

And since I don't off-road, who cares if the chassis is the same as a regular car?

No AWFD either, but there is rarely snow here in southern England, and anyway I have the Peugeot excellent advanced traction control for snow, mud, gravel and sand.

Nothing wrong with e-SUVs/crossovers if the initial price and O&M cost is the same and/or lower than equivalent e-cars.

However, that is not always the case. Both the initial price and O&M are often much higher and so is pollution and GHGs.

Harvey, anything like an equivalent electric car would cost me perhaps £10,000 more, the nearest is the Mitsubishi Outlander which is a PHEV not a BEV, and since I am an apartment dweller I would have nowhere at all to plug it in.

You are correct. The current initial price of extended range BEVs is often $10K to $25K+ over equivalent ICEVs. It may not change that much before 2030 or so when batteries performance is 100%+ better and price is 50% less.

Currently (and for the next 10+ years), PHEVs may be a better solution, if you have home (and work place) charging facilities. If not, HEVs with 55+ mpg are still a good interim solution.