Researchers from Nanjing University have developed a new method for the extraction of lithium metal from seawater using solar-powered electrolysis with a NASICON solid-state electrolyte as the selective membrane.

In a paper in the journal Joule, they report that their electrolysis method made the lithium extraction process faster and more controllable than in adsorption- and dialysis-based methods and that it could overcome the limit of the concentration difference that is present in the dialysis method.

Additionally, with an aprotic electrolyte in the cathode side, they were able directly to obtain metallic lithium during the lithium extraction process.

The team also said that their method is extensible by using different types of ion-selective membranes or anodes to recover other elements in seawater.

Currently all commercial lithium is sourced from ores and brines on land, which contains a total lithium reserve of 14 million tons according to the latest survey conducted this year. … the geographic distribution of land-based lithium resources is uneven, with more than 98% of the total reserves concentrated in Chile, Argentina, China, and Australia. In addition, lithium extraction from ores and brines has a significant environmental impact, including water pollution and depletion, soil damage, and air contamination.

… In contrast, the ocean contains 230 billion tons of lithium, an amount four orders of magnitude larger than the lithium reserves on land. Since the amount of lithium in this massive reserve is far higher than the amount consumed annually by human activity, the impact of lithium extraction from seawater on the lithium concentration in the ocean would be negligible. In other words, the omnipresent seawater can act as a nearly infinite global lithium resource, making it a promising source for the future lithium supply.

Even though the lithium reserves in the ocean are immense, its concentration in seawater is very low (0.1–0.2 ppm). Researchers have proposed several strategies for extracting lithium compounds from seawater, such as adsorption- and dialysis-based methods. … the lithium extraction rates of the current techniques are relatively slow.

In their study, the Nanjing researchers used a lithium superionic conductor (NASICON)-type solid-state electrolyte as the lithium-ion selective membrane, with an aprotic electrolyte instead of an aqueous solution being employed in the anode side of the electrolysis cell to create a proton-free compartment.

The prototype device can be powered by a solar panel and metallic lithium can be directly generated during the lithium extraction process. 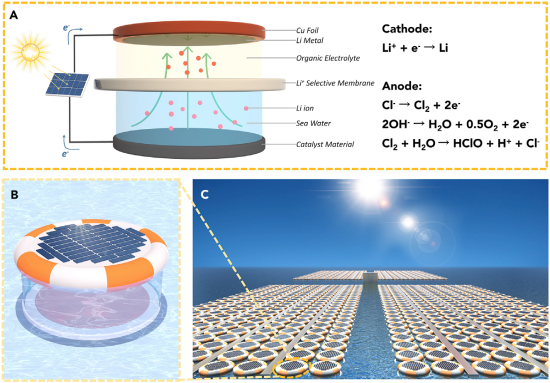 The electrolyte of the electrolysis cell is divided into two parts by the solid-state electrolyte. A LiClO4-propylene carbonate solution is on the cathode side and seawater is on the anode side. During electrolysis in the study, the cell was charged under constant current by a solar panel. Driven by the electric field, cations in seawater (Na+, Li+ …) move from the anode toward the lithium-ion-selective membrane. Only lithium ions transported to the cathode side; the other cations were blocked and remained in the anode compartment.

On the cathode side, lithium ions are reduced to metallic lithium on a copper foil. Cl- or OH- is oxidized to Cl2 or O2 on the anode side, and part of the Cl2 may further react with water to form hypochlorite.

Further study is required to clarify the impact of the current density on the lithium production rate (or energy efficiency) of the lithium extraction device.

I was hoping that this might be useful for uranium extraction too, but the concentrations of that are around 50 times lower:
www.mdpi.com/2071-1050/2/4/980/pdf

And we are not going to get supplies of cobalt from the sea, that's for sure! (ibid)

"..230 billion tons of lithium, an amount four orders of magnitude larger than the lithium reserves on land. "
That IS interesting.

There are already efforts to extract uranium from seawater.  The most recent advance appears to use more or less off-the-shelf acrylic fibers; older ones used things like extracts of the Japanese persimmon.

If this electrolyte can be tuned for uranyl ions, it is likely to be cheaper than processes which require the soaking and then processing of ion-exchange fibers.

More proof that search engines are censoring.  I did searched for "uranium from seawater" specifying site:greencarcongress.com and that page was not in the results.

Using Google advanced search and the same terms it is the first item up.

I always use that for anything technical.

Fits well into the new technological trends of the years to come. If this works with seawater, it will sure do with brine.

Great technology. Imagine taking some acreage in the California desert and pumping in sea water to create distilled water, lithium and other minerals. A winning approach!