A new study by the European Automobile Manufacturers’ Association (ACEA) finds that the affordability of electric cars remains a strong deterrent for customers across the EU, along with lack of infrastructure and lack of investment in infrastructure.

The analysis, which compares national data on the market uptake of electrically-chargeable vehicles (ECVs) with GDP per capita, shows that the market share of ECVs is close to 0% in countries with a GDP below €18,000 (~US$21,000), while it is no more than 0.75% in half of all EU member states.

The European Parliament’s Committees on industry (ITRE) and transport (TRAN) will vote on the European Commission’s proposal for future car and van CO2 targets on 10 July. ACEA cautions that the targets must be realistic, taking into account what people can actually afford to buy.

The European Parliament mustn’t lose sight of the fact that the market is essentially driven by customers. A natural shift to electric vehicles will simply not happen without addressing consumer affordability.

Besides affordability, the report identified a balanced supply of charging and refueling infrastructure as a pre-requisite for stronger sales of alternatively-powered vehicles across the EU.

The study found that of the roughly 100,000 charging points available today, 76% are concentrated in just four countries (the Netherlands, Germany, France and the UK). On the other end of the spectrum, a country such as Romania—roughly six times bigger than the Netherlands—only has 114 charging points.

Electrically-chargeable vehicles (ECVs)—battery-electric and plug-in hybrid electric vehicles—accounted for 1.5% of total car sales in the EU; the market share of ECVs grew by 0.9 percentage points between 2014 and 2017.

We are worried that some policy makers have completely unrealistic expectations regarding the pace of market development. Already with the Commission’s current proposal for a benchmark, we would need to jump from less than 1% of battery electric car sales today to 30% in the space of less than 12 years. And the Parliament is proposing even more aggressive targets, going as far as 50%.

The new ACEA data not only show a clear split in electric car sales between Central-Eastern and Western Europe, but also a pronounced North-South divide (eg Greece 0.2%, Italy 0.2% and Spain 0.6%). By contrast, an ECV market share of above 1.8% only occurs in countries with a GDP of more than €35,000. 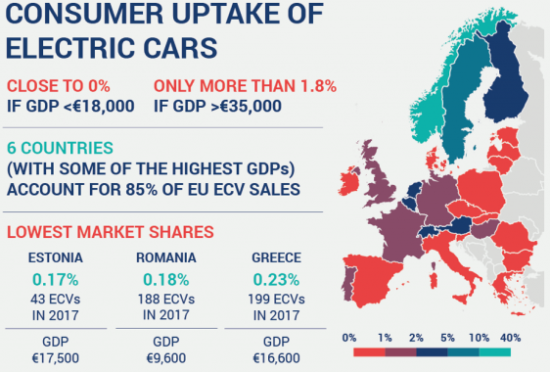 MEPs should not forget the impact on people: a forced push for electrification could lead to social exclusion in many EU countries, reducing the mobility of people who need it the most.

In order to compensate for this highly fragmented market, more than 50% of all new cars sold in Western Europe would have to be battery electric in order to reach an EU-wide average benchmark of 30% by 2030, as proposed by the Commission.

The auto industry is eager to move as fast as it can towards zero-emission vehicles. There is no doubt that this is the future. But to get there, customers must be convinced that this is the best choice for them; both in terms of affordability as well as convenience. A natural shift in the market will not happen without addressing these barriers.

This is not possible. Tony Seba said so.

Having been to Spain recently, affordable electric scooters w/ infrastructure would go a long way. They're still commonly riding two-strokes :-(

EVs are less complicated and easier to build than ICEVs; less expensive batteries are necessary o bring the costs to parity.

Higher performance (5X), much lower cost (well under $100/kWh) and much quick full charge (under 10 minutes) and longer lasting (over 4000 charges) batteries are all required for electric family cars/vehicles to compete with current polluting ICEVs.

It is difficult to sell something with so many flaws and shortcomings?

@LAD & HarveyD
Do you really believe what you say yourselves?

Easier to build, less expensive... 5X higher performance... flaws and shortcomings...
Having seen all the trouble that e.g. Tesla has and how expensive their cars are, I would like to see that you elaborate a little bit on your statements.

For an extra $2K to $4K your can buy affordable high quality HEVs with reduced fuel consumption (up to 55 mpg) and extended range, without the flaws and shortcoming of current BEVs (including the overpriced TESLAs).

Most if not all current BEVs are not (currently) competitive.

Much better, much lower cost batteries are required.

Near future improved FCEVs may be one of the solution to reduce pollution and GHGs without the shortcomings of current BEVs.

“Electrically-chargeable vehicles (ECVs)—battery-electric and plug-in hybrid electric vehicles—accounted for 1.5% of total car sales in the EU; the market share of ECVs grew by 0.9 percentage points between 2014 and 2017.

This is the type of report that gives reports a bad name. Show this to anyone with a modicum of analytic ability and a moderate proficiency in math and they’ll write this off as propaganda.

They don’t even bother to examine the cost trend in batteries which is central to their thesis. Why? Because batteries averaged about 20% decline in cost from 2010 to 2017. At that pace battery costs are a non-issue by 2021 and an advantage by 2025.

Not only is your 20% cost decline for batteries way too high, and the more modest 8% or so more generally accepted just the result of averaging any wild claim that companies dish out whilst if you try to buy them you come out with prices more indicative of perhaps $250KWh in real costs, but prices don't decline by magic following a trend line.

Current chemistry if not approaching its limits is making incremental gains more and more difficult, whilst the very substantial fraction due to raw materials costs is under pressure from rising prices.

New technology is needed, and we don't even know in detail how to do it, so it is a long way from mass production.

“Not only is your 20% cost decline for batteries way too high, and the more modest 8% or so more generally accepted”

The generally accepted 8% is for specific energy density increases (P/M). That has been very consistent but we’re talking about is $/P. I believe BNEF pegged the industry average at $1040 /kWh in 2010 and at $209 7 years later in 2017. That is actually over 20% CAGR. BNEF’s numbers represent an industry average from 50 companies. They do not represent the market leaders. You can quibble about their methodology but the other credible surveys I’ve seen all had 2010 industry prices over $1,000 /kWh and 2017 between $200-$240 lending credence to their accuracy. Can you offer any surveys that materially challenge or contradict BNEF’s numbers?

While price decreases have been more variable than specific energy increases they have been consistently downward. Last year’s decrease was 24% per BNEF. We are at the point where another Couple of years of ~20% price declines will have battery costs on the verge of being market viable.

Advancements are proven and in the pipeline. NCM 811 will supplant NCM 622. Multiple vendors are committed to production in the next 0-18 months. Reputedly Kia and Hyundai will use this in the kona and Niro this year.

The problem with the argument that the price of materials increasing, cobalt for example, is that the amount of cobalt used is decreasing faster than the rate the price is increasing.

EV batteries energy storage performance (Wh/Kg) goes up about 5% to 8%/year but price per kWh have indeed gone down at an average of 20%/year for the last 7 to 10 years or so.

To go beyond that may require new technologies, lower cost materials and fully automated factories.

LiB specific energy (P/M or WH/kg) has consistently improved at 8% per year.

If that trend would continue we would actually be under $100/kWh by 2021. Using BNEF’s industry average from 2017 and rounding to the nearest dollar;

Would this be the NET cost at CELL level or at full module level?

You may be right Gasbag but technology has to be changed before $35/kWh can be reached or if cost much below $100/kWh can happen.