Baidu; SB Drive, a subsidiary of Softbank dedicated to self-driving technology research; and King Long, a leading commercial vehicle manufacturer in China, announced a strategic partnership jointly to develop and to deploy a version of the Apolong self-driving minibus for the Japanese market. Under the agreement, ten Apolong minibuses will be exported to Japan from China in early 2019. This agreement marks the first time autonomous vehicles will be exported from China.

Apolong is a fully autonomous minibus co-developed by Baidu and King Long. The minibus is powered by the Apollo open source autonomous driving technologies created by Baidu (earlier post) and is China’s first fully self-driving electric bus to enter the volume production phase. 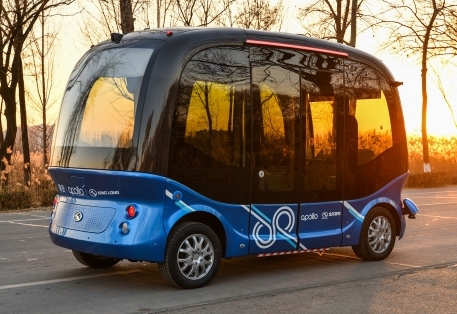 The Apollo open autonomous driving platform was launched last year and is one of the world’s largest and most diverse autonomous driving ecosystem. Since its launch, the platform has garnered 116 global partners from automotive and technology industries, including Ford, Bosch, Velodyne, Intel, NVIDIA, and Microsoft.

As a member of Apollo, King Long began working with Baidu in October 2017 to develop the Apolong buses. The first fleet will be deployed in geo-fenced places such as parks, industrial campuses and airports in five Chinese cities.

In the same year, SB Drive conducted autonomous bus testing in Okinawa as part of the “Autonomous Driving System” program designated by the Cabinet Office of Japan. This made them an ideal partner for this project.

This is a new win-win-win technology. The most costly O&M are greatly reduced and/or eliminated with this type of ADV/e-bus.

Will imports in USA be blocked and/or taxed by current administration and bus drivers unions?

Will ASIA continue to lead with electrified ADVs. Will EU and USA try to catch up or rely on import taxes to block eADVs from ASIA?

There is Navya in Europe and Olie in the U.S.
IMO is this makes it we could see more shuttles like this in cities.