On behalf of the Australian Government, the Australian Renewable Energy Agency (ARENA) has announced $1.5 million toward the funding of Australia’s first green hydrogen innovation hub at Jandakot in Western Australia. Total project value is $3.3 million. 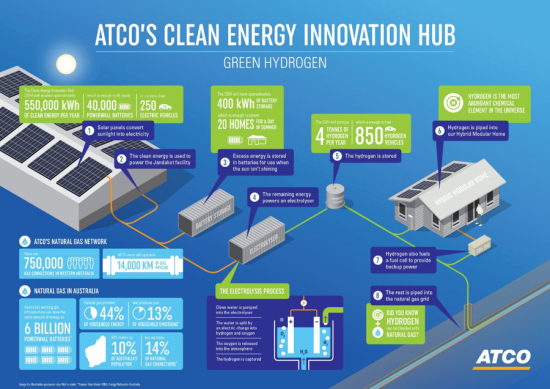 In Jandakot, gas company ATCO will trial the production, storage and use of renewable hydrogen to energize a commercial-scale microgrid, testing the use of hydrogen in different settings and applications including in household appliances.

The development project will evaluate the potential for renewable hydrogen to be generated, stored and used at a larger scale. ATCO aims to assess the practicalities of replacing natural gas with hydrogen at a city-wide scale across a municipality.

Green hydrogen will be produced from on-site solar using electrolysis, a range of gas appliances and blending hydrogen into the natural gas pipeline.

Green hydrogen offers opportunities to provide carbon free energy to cities and towns, while leveraging existing natural gas infrastructure. Along with ARENA’s R&D funding round focussed on exporting hydrogen, this project will explore the opportunities for hydrogen in Australia, which could also include the development of standards for green hydrogen production, distribution and use.

DC intermittent solar power charge a battery, then a continuous DC water electrolysis, Hydrogen compression-separation (membrane) and drying. Hydrogen combustion in place of natural gas.
What would be efficiency of a such chain?
Surely very poor, to replace local natural gas combustion.
Western Australia is a very rich and nice country to invest in a such sophisticated gas machine with several centuries pay-back.

If you look at turning renewal methane into hydrogen at point of use you end up with efficiency on par with EVs, it takes energy to make electricity.

New solar panels are up to 30+% efficiency and can last up to 50 years, transforming endless solar light into very low cost clean electricity and clean H2, specially in sunny Australia. Many more similar installations will soon be installed in Australia and other sunny places.

Anti-H2 economy posters will continue to claim that overall efficiency of solar panels and electrolysers is currently not high enough and it is a waste of clean (free) e-energy.

With both solar panels and electrolysers efficiency going up year after year, clean H2 has a great future for FCEVs and as a mix with NG for home and industries and other usages.