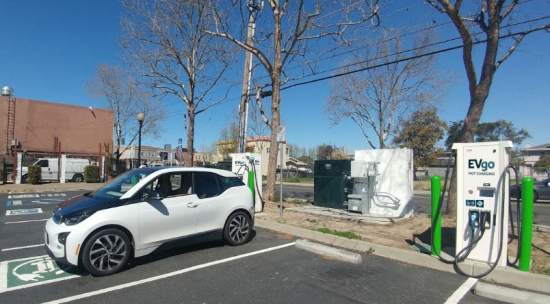 EVgo has integrated second-life BMW i3 batteries to store energy from the grid generated during peak solar hours and later use that stored energy to fast-charge EVgo customers during periods of high demand.

In addition to reducing curtailment of solar or wind power, a benefit to all grid users, EVgo is also commercially demonstrating the reuse of EV batteries for grid benefit.

The increased use of second-life battery technology is an exciting development, keeping fast charging of clean electric vehicles affordable and insulating the grid from spikes in electricity demand. Reusing batteries as backup for charging is a win-win for the economics and the environmental benefits of EVs.

—Austin Brown, Executive Director of the UC Davis Policy Institute for Energy, Environment and the Economy

Each second-life battery pack has a capacity of 22 kWh and when combined with a 30 kW inverter offers a 30 kW/44 kWh energy storage system capable of demand charge management.

EVgo conducted a successful test case at the UCSD microgrid prior to launching the second-life battery system in Union City. This test case and the Union City implementation are part of the first of three technology demonstration projects that EVgo is currently engaged in with support from the California Public Utilities Commission:

EVgo saw a record year in 2017, with its network of chargers providing the equivalent 40 million miles of emissions-free electric driving, a significant year-over-year increase compared to the approximately 26 million EV miles charged by the network in 2016.

Using old/used EV batteries is a smart idea and will benefit all EV users, specially those using ultra quick charge (up to 350+ KW) facilities and allow higher percentage of REs.

I asked Nissan to do this, they have 300,000 packs losing capacity, they said NO way.