Audi Sport ABT Schaeffler secured the team title in the teams’ classification in Formula E Season 4 racing with impressive comeback drives in the season finale in New York. The Season 4 series was the last for the Gen 1 car. Four podium positons during the weekend, including a one-two finish and 78 of a maximum of 94 possible points, turned a deficit of 33 points before the final weekend into a 2-point advantage.

In Sunday’s race, Lucas di Grassi crossed the finish line in second place after 43 laps around the street circuit in Brooklyn. The Brazilian grabbed the championship runner-up spot with his seventh consecutive podium result. In the first four races of the season, di Grassi didn’t finish in the points once. From the sixth race onwards, he stood on the podium after every race.

Teammate Daniel Abt, finished third and scored 15 points as well as an extra point for setting the fastest race lap, making a valuable contribution to the victory in the teams’ classification in the final race. 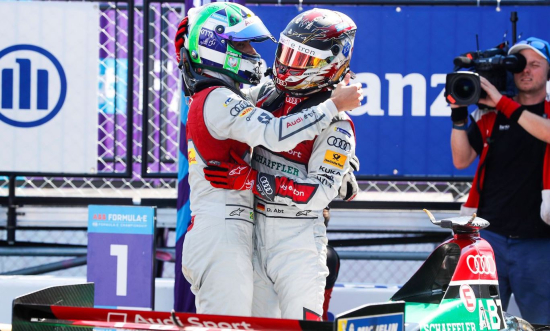 Yes, we were biting our nails all the way to the last corner and the final second of the race, but now it’s reality: Teams’ Champions! I’ll now give Lucas and Daniel a big hug. This season was up and down, and they always did their best. Also, today when a push came to a shove, they delivered the goods. A big thank you also goes to our base camp in Germany. Great job.

During the Formula E finale, technology partner Schaeffler offered a view into the future of Formula E. On Saturday evening, Schaeffler invited almost 300 guests—including the German Ambassador to the US Dr. Emily Haber—to view a prototype of the new Audi e-tron FE05 in which jointly-developed powertrain technology from Schaeffler and Audi is being used again.

Season 5 of Formula E will begin with the first race in Riyadh (Saudi Arabia) during mid-December. The Gen 2 car will feature a top speed of 280 km/h (174 mph) and the ability to travel double the distance of its Gen 1 predecessor.