With these positive results, fuel cell technology will now be a viable and production-ready technology for transit operators looking for zero-emission travel. With the ability to refuel within 20 minutes and a proven transit duty cycle range of over 200 miles, the Axess FCEV is the only zero-emission transit bus that can seamlessly integrate into existing transit fleets.

The El Dorado National FCEBs are now eligible for a $300,000 voucher incentive under the California Hybrid and Zero-Emission Truck and Bus Voucher Incentive Project (HVIP). 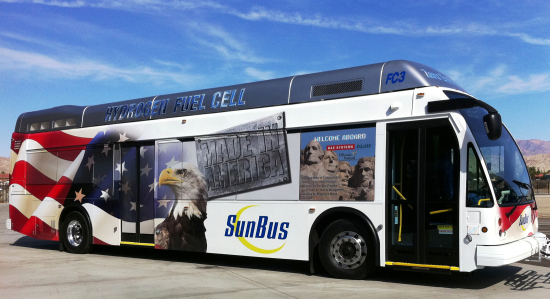 There are currently 21 FCEBs in operation with several transit agencies in California, some with many years of revenue service. These buses operate on long routes with demanding duty cycles under extreme weather conditions. This includes the Coachella Valley, where Sunline Transit currently operates 8 fuel cell electric buses.

The extended range (300 miles) FCEB unit is interesting for inter-city routes and longer city routes. A strong competitor against diesel and electric buses. Make a driverless model/option and you have a winner.

Can anyone think of a reason why fuel cell cars could not be made capable of 500,000 miles and 12 year plus lifetimes?

Since fuel cells are modular, I am struggling to think of one.