Findings presented in a new working paper by a team at the International Council on Clean Transportation (ICCT) suggest that the new generation of supersonic aircraft currently in development by three US-based companies (e.g, earlier post) are unlikely to comply with existing international environmental standards for subsonic aircraft.

The ICCT team, led by Dan Rutherford, estimated that the most likely configuration of a representative SST would exceed limits for NOx and CO2 by 40% and 70%, respectively. A noise assessment concluded that emerging SSTs are likely to fail current (2018) and perhaps even historical (2006) landing and takeoff noise standards. 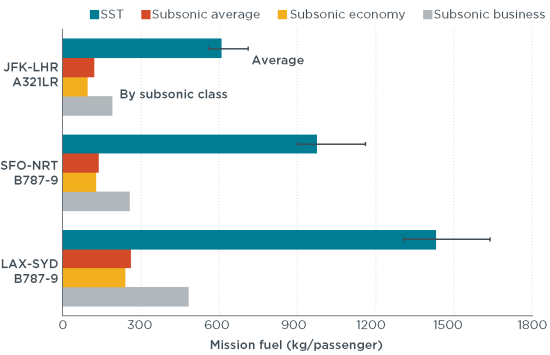 One-way mission fuel consumption per passenger by route and class. Source: The ICCT.

The three companies currently developing new SSTs in the US are Spike Aerospace, Aerion Corporation, and Boom Supersonic; the first two are targeting business aircraft, while Boom is developing an airliner.

The ICCT team used Boom, which is targeting a 2023 market entry, as the basis for the modeling for the study. The ICCT team contacted Boom for information about the design and performance characteristics of its aircraft. The company provided general confirmation of publicly available data, but no detailed information regarding engine specifications.

The ICCT team estimates of engine component efficiencies, and solved thermodynamic equations across the components to find temperature and pressure at each combustion stage, along with final exit jet velocity.

The researchers then used Piano 5 aircraft performance and design software to compare estimated fuel burn with subsonic transport. The mission profile in modeling was based roughly on the profile flown by the old supersonic Concorde.

Modeled NOx and CO2 performance of SST aircraft by configuration 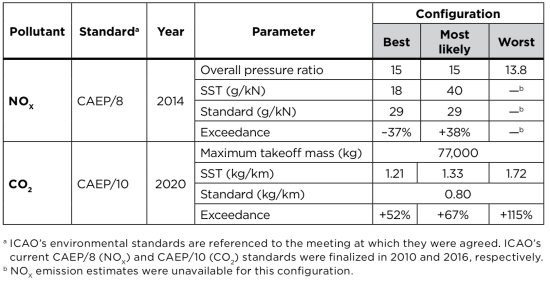 … Independent of standards, the economic feasibility and social acceptabil- ity of new designs remain to be seen. The representative SST is expected to burn 5 to 7 times as much fuel per passenger as comparable subsonic aircraft. The results were sensitive to seating class, route, and the exact configuration of the aircraft. … Profitable operation of these aircraft would require revenue and yields high enough to recover these extra fuel costs.

This increased fuel consumption would lead to proportional increases in CO2 emissions. The share of CO2 emissions attributable to international aviation is expected to increase from 1.4% today to between 7% and 14% of a Paris-compatible global carbon budget by 2075. The introduction of new supersonic aircraft opens up the potential for even larger increases. The social acceptability of this increase, and therefore the public’s support for supersonic travel, remains to be determined.

Current Jet Turbines (engines) are not very adapted/suited to supersonic travel. They are too noisy and burn too much fuel.

Supersonic planes could wait till better /cleaner engines and planes are available.

Meanwhile, modules could travel (float) in appropriate (vacuum) tubes @ up to 1200 kph with much lower pollution and GHGs.

It will be the same on this go-around as it was the last time: Based on the fuel consumption alone, simple economics will dictate that supersonic aircraft will remain a tiny niche market compared to standard commercial aircraft.

If supersonic aircraft account for let's say 0.01% of commercial air traffic, the overall effect of the higher fuel consumption (and therefore CO2) and other emissions are insignificant.

Even on a flight from North America to Europe, the time spent waiting in airports is a pretty big percentage of the total travel time ... especially if you need a connecting flight at one or both ends, which is highly likely if the flight across the ocean only goes on an infrequent schedule between specific high-traffic airports that don't happen to coincide with your travel plans.

We should be building hyperloops for domestic fast passenger and freight travel. For overseas routes, aircraft powered by gross polluting jet engines are way too inefficient. We need to look at developing hydrogen fuel cells and ducted electric motors to power them.

One hybrid jet has two turbines and one electric on the tail. Turbines for takeoff and climb then throttle back and use the electric for cruise. Reform jet fuel to hydrogen for fuel cells.

Boom Supersonic
Not the best choice of names.