In 2017, there were more than 650 MW of fuel cell power shipped worldwide, according to the US Department of Energy (DOE).

The largest increase in MWs occurred in the transportation sector, and that growth can be attributed to the introduction and expansion of fuel cell light-duty vehicles from Japan and Korea to new regions around the world. 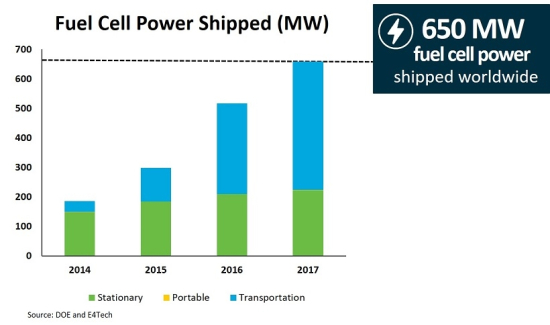 Other transportation applications such as buses and material handling also contributed to the increase in MW shipped.

I think this goes some way to answering the notion that the technology is not suitable for the light vehicle fleet.

Some real volume should start to be attained by around 2020, with Toyota for instance now building the facilities to up the production of their FCEV from around 3,000 pa to around 30,000.

Hyundai will not want to be left too far behind, and the Chinese are putting considerable emphasis on getting a start on fuel cell technology, with for instance deployment and production of fuel cell buses being way ahead of elsewhere in their vast bus market and commercial volumes certain to be reached their first.

FCs are quickly switching from stationary to transportation usage (light vehicles, trains, trucks and buses). Toyota, Hyundai and Honda (and many Chinese and EU manufacturers) will soon (by 2025/2030) built up to 1,000,000+ FCEVs/year.

Many more clean H2 stations will be required and be built to meet requirements. Clean H2 price will drop rapidly from $10/Kg to $3/Kg, specially if tax free and bio-fossil fuels are taxed more to compensate for higher pollution and GHGs.

Vehicles with larger batteries and home + place of work charging facilities could use smaller FCs and use less H2 but more electricity.