Celanese Corporation has signed a Letter of Intent (LOI) with Chengzhi Shareholding Co., Ltd., to further the development of acetic acid-based ethanol in China. 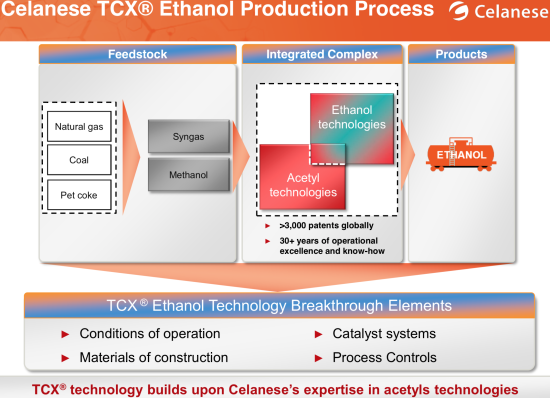 Pursuant to the LOI, Celanese would sell its Nanjing ethanol unit to Chengzhi, along with all related assets, including equipment, storage tanks and pipelines as well as all necessary land rights and permits.

Additionally, Celanese would contribute its TCX technology, along with all associated patents, know-how and trade secrets, into a newly formed joint venture. Through this joint venture the two companies would collaborate to further strengthen the TCX technology and promote additional opportunities for utilizing the TCX ethanol process technology within China.

Celanese is one of the world’s largest producers of acetyl products (intermediate chemicals, such as acetic acid, for nearly all major industries); acetyl intermediates account for about 45% of Celanese’s total sales. Celanese uses a methanol carbonylation process (reaction of methanol and carbon monoxide); the reaction utilizes a catalyst and the resulting product (acetic acid) is purified through distillation. Celanese continues to enhance this core technology.

Celanese discovered that ethanol can be made on an industrial scale directly from acetic acid with very high selectivity and yield. More particularly, its invention provides a process for the selective formation of ethanol from acetic acid using a process of hydrogenating acetic acid over a platinum/tin catalyst.

The LOI is subject to the parties reaching definitive agreements. The two companies are also committed to working together to implement a smooth transition leading to a restart of the Nanjing ethanol unit as soon as possible, likely in 2019. Financial terms and conditions are not being disclosed at this time.

Chengzhi Shareholding is a high-tech company the major shareholder of which is Tsinghua University; additionally, it is a member enterprise of Tsinghua Holdings Co Ltd., a key enterprise in Jiangxi Province, and the industrial platform for industrializing Tsinghua University’s scientific and technological achievements in fields such as clean energy, functional materials, and medical healthcare.