Over the last two decades, fully electric cars have had, let’s say, a slow start. In 1997, the Toyota Prius was released as the world’s first mass-produced hybrid. And while hybrid technology has taken off, drivers have been hesitant to accept fully battery-powered tech for a variety of reasons, including a lack of charging stations. But things are looking up for electric. Today you can get a full charge at one of the 16,000 stations across the US. 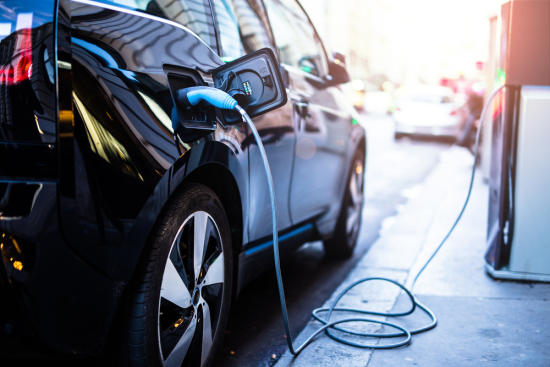 Plus, battery costs are rapidly decreasing and the public is warming up to the idea of electric cars. In fact, some experts predict electric vehicles (EVs) to account for 65 percent to 75 percent of sales in 2050—which is also good news for the environment.

Another hot topic in the auto world is autonomous rides. Though we’re still several years away (at least) from robots taking the wheel, some cities in America—Las Vegas, Phoenix and Pittsburgh, to name a few—have already seen self-driving vehicles in action. In the future, autonomous vehicles and battery-powered technology could work together to create cleaner, more efficient roads.

Electric Vehicles: Right Now. Maybe you’ve ridden in an EV. Maybe you own a Tesla Model X or Audi e-tron. For the most part, they look, sound and act like a traditional car, but there’s one major difference: their engines run on batteries and not on internal combustion powered by fossil fuels. The pros of going gasless include reduced maintenance costs, lower fuel expense and—most importantly—less pollution. However, electric vehicles are currently more expensive than traditional vehicles. Some experts believe battery costs will continue to decline over the next 10 years, which will further entice shoppers. In fact, from 2014 to 2016, battery prices fell by 50 percent, allowing EVs to gain some traction.

Driverless Vehicles: Right Now. No, they’re not straight out of a sci-fi movie. The term autonomous vehicle (AV) can refer to a car, a truck or even a drone. These vehicles operate on computer intelligence with varying levels of human assistance. Self-driving cars come decked out with intelligence you might not see: sensors, radars and cameras to virtually scan the road, with a ton of processing power under the hood to handle the data streams from all those input sensors. Currently, several laws and regulations stand in the way of a driverless reality, but automakers and tech giants continue to refine their robot rides because they know they’re the next big thing.

Should All AVs Be Battery-Powered? Consider this: At the root of driverless technology is convenience. Humans will no longer have to stress about driving. But the consequences could be harmful. For example, you arrive home from the grocery store and realize you forgot the milk. No problem — just send the car back to fetch it. That’s now two trips back and forth to the grocery store where there might have only been one. Can’t find a parking spot at a baseball game? Your self-driving vehicle can just drive around in circles for three hours. While it’s a much more convenient option, the environmental toll could be severe. Some experts predict that gas-powered, self-driving vehicles could wreak havoc on the environment, causing a 200 percent increase in emissions.

The solution? Make all AVs electric. A marriage of these two powerhouse technologies would completely change the auto industry, the environment and our lives. As Esurance found in a recent report, AVs could also be a cheaper option for consumers—potentially made cheaper still if those AVs are electric. There are still a few variables on the table, but it’s safe to say a clean, green electric AV would significantly reduce air pollution.

Fewer Traffic Jams, Less Pollution. Being gridlocked on the highway doesn’t just make you late for dinner, it also damages the environment. In 2012, a study by the Texas A&M Transportation Institute found that traffic congestion was responsible for 56 billion pounds of carbon dioxide pollution. But in the future, AVs will be able to talk to each other (vehicle-to-vehicle communication) or infrastructure (vehicle-to-infrastructure communication). This will lead to perfectly synchronized driving patterns. Just think—no braking for red lights, stop signs or traffic. And with orchestrated driving on battery power, emissions could be reduced drastically.

Ownership Could Look Different. Here’s a fact: The average car spends 95 percent of its life in park. In the future, sharing an electric vehicle might be standard. Imagine this – you hail a nearby ride to pick you up and take you to work. Rather than sitting (or driving) idle, the vehicle calls on its next passenger and continues to do so until it needs a full charge. This scenario could drive down transportation prices considerably while also reducing the need for consumers to own cars, eliminating environmental waste.

What’s Next for Electric Self-Driving Cars? For self-driving cars to accelerate EV adoption, it will be a collective effort. Policymakers need to establish regulation and demand cleaner vehicles. Automakers and tech giants must continue to raise the bar and push for battery power. And of course, it’ll take the confidence of consumers to trust the clean, self-driving machines and put them to use.

Haden Kirkpatrick is the head of marketing strategy and innovation at Esurance. Haden is an innovator and futurist who is constantly thinking about how IoT, self-driving cars and machine learning will impact the auto insurance industry. Learn more about Esurance by visiting Esurance.com.

Autonomy puts a significant power drain on the car.

And BEVs have none to spare in cold weather.

That is why Hyundai have gone for their Nexo FCEV as the lead vehicle in their autonomy program.

Not only can they cope better with the power drain in normal circumstances, but in the cold excess heat from the fuel cell keeps the battery at optimum operating temperature and the occupants warm. so that range is not significantly decreased.

So they are more able to cope with the power demands of autonomy in all conditions, and much better in cold weather.

"Parked 95% of the Time"
This is an under utilization of expensive resources.

In many places, up to 80% of the purchase and O&M cost of public (people) transportation systems are paid by various levels of government.

Free rides on new driveless e-trains-trams and buses would be possible without increasing governments hand outs due to major reduction in O&M.

More driverless e-trains, e-trams and e-buses could be in operation during peak periods, to meet demands, without extra O&M cost.

Your toothbrush spends a lot more of its time "parked", but having it ready for use in an instant is the entire purpose of owning one.

There's an insidious side of car-sharing.  If you have to be part of a car-sharing network to have mobility, whoever controls the network can render you immobile any time they want.  They also track all your movements.

Tooth brushes and cars are not the same thing,
It does not have to be car sharing, with good transit you may not need a car.

Ride sharing usually refers to privately owned vehicles being shared for a ride. But it could equally apply to a small van or bus, which then becomes part of a public transportation system. With a good system you don't need to own. I don't own my internet, nor my cell phone access. Although I do own a toothbrush -- maybe two. :-)

By removing drivers on e-buses, e-trams and e-trains you could reduce total operation cost by 50+% over a 10+ year period and transport people free 24/7, much safer and faster because you would greatly reduce travel time, trafic jams, pollution, GHGs and improve people (passengers and bystanders) health.

This programme could be progressively introduced between 2025 and 2035.

We produce 100 million vehicles worldwide each year, if many of those are shuttles rather than personal cars we go a long way towards reducing congestion, pollution and fuel usage.

Yes SJC, most major cities have created unacceptable traffic jams and delays and have created increasing costly travel time. Building more highways/roads, like L.A. has done, seems to promote the use of more private vehicles and create more delays, pollution and GHGs.

The use of (free rides) driverless e-buses/vehicles could effectively attract many more users, reduce the use of private vehicles and associated pollution, GHGs and costly delays.

Free driverless e-Buses (all sizes) would be better (for all users) than shared e-vehicles.

Many cities are currently using oversized articulated buses to reduce the cost of highly paid drivers per passenger. In most cities in our region, users barely pay enough to meet drivers full cost. All other cost are paid by Provincial/City governments.

Consequently, driverless e-buses could transport all passengers FREE without extra subsidies from governments.

The 4000+ AD e-buses required could take up to 8+ years to introduce. Since the region is short of various labours, current drivers (and many maintenance staff) would be progressively laid off and retrained, specially for/in education/medical fields.