Researchers at Linköping University and Umeå University in Sweden have developed a new and efficient way to use electrocatalysis to produce hydrogen gas from water using electrodes with nanotruss structures of iron oxide. A paper on their work is published in the ACS journal Nano Letters.

The Plasma and Coatings Physics research group at Linköping University manufactures thin films of nanomaterials using pulsed plasma sputtering. The basic process, sputtering, is a commonly used coating method used in industry and research. Atoms are sputtered onto a substrate in a chamber to form a thin layer of constant thickness, with the aid of ionized gas.

The LiU researchers have further developed the technique and use short but highly efficient pulses of a plasma in order to cause nanoparticles of the sputtered atoms to grow. The nanoparticles grow as they float in the gas.

However, in one of the experiments run by Sebastian Ekeroth, doctoral student in plasma and coatings physics, the material turned out to have formed in completely the wrong place.

It looked as if debris was lying around in the chamber. I examined some of it in a microscope and saw a tangled bundle of nanowires.

Professor Ulf Helmersson realized the significance of the findings, and a new research field based on ferromagnetic nanostructures was founded. These magnetic materials are becoming increasingly interesting for energy storage (with a special interest in the storage of energy from renewable sources), catalysis, and the synthesis of chemicals. 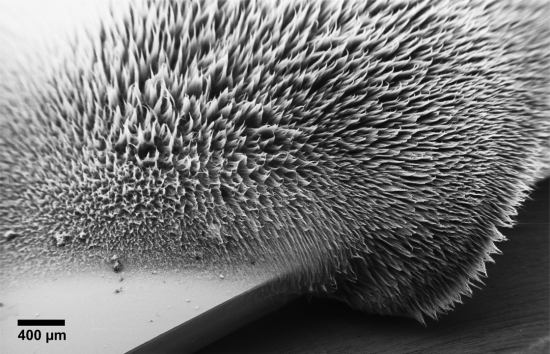 Overview of Fe nanotrusses covering the surface and edge of a Si substrate. Photo credit: Robert Boyd and Thor Balkhed.

The group at LiU, in collaboration with researchers at Umeå University, developed a method to control the production of ferromagnetic nanostructures with the aid of pulsed plasma sputtering.

In this case, Sebastian Ekeroth used ionized argon introduced into a chamber with an iron cathode and a stainless steel anode. Iron atoms are sputtered from the cathode and form nanoparticles with a diameter of around 20 nm. An applied magnetic field causes the iron particles, which are intrinsically magnetic, to come together and form a stable and well-defined trussed structure, both on paper and metallic surfaces.

The complete structure, with all its angles and nodes, is also covered by a layer of iron oxide of thickness 2 nm when the structure is exposed to air.

The way in which the iron particles hook into each other gives a very stable structure. The environment in an electrolyte can be very rough-and-tumble. If the conductivity is to be preserved until the end of the process, it’s important that the structure doesn’t break up.

The researchers used a cathode with iron oxide nanostructures on the surface of a conducting layer of carbon paper to break down water into hydrogen and oxygen.

This electrode has advantages over expensive electrodes made from the difficult-to-obtain platinum. The new electrode is lightweight, can be bent, has a high capacity, and is composed solely of environmentally friendly and easily sourced substances—i.e., iron, oxygen and carbon.

The production of hydrogen is one important application, but we are also looking at other areas, such as electrodes in batteries, in supercapacitors, and for use in photocatalysis.