Engineers at the University of California San Diego have shed new light on the atomic-level mechanism of the sulfur embrittlement of nickel, a classic problem that has puzzled the scientific community for nearly a century. The discovery also enriches fundamental understanding of general grain boundaries that often control the mechanical and physical properties of polycrystalline materials. An open-access paper on the work is published in Nature Communications. 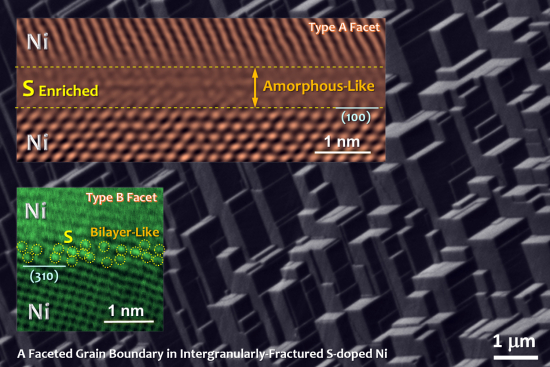 The study was led by Jian Luo, a professor of nanoengineering and materials science and engineering at the UC San Diego Jacobs School of Engineering.

Since the early 1900s, engineers and scientists have recognized that sulfur impurities cause nickel and other ductile metals, such as iron and steel, to fail at low stress levels. Sulfur embrittlement of metals is of general technological importance because many engineered alloys are used in sulfur-bearing environments, such as the nickel-based high-temperature alloys used in next-generation coal-fired power plants for increasing energy efficiency.

Researchers have known that this embrittlement is related to the grain boundary segregation of sulfur, but the underlying atomic mechanisms have remained elusive.

Luo’s team found that competition between interfacial ordering and disordering leads to the alternating formation of amorphous-like and bilayer-like facets at general grain boundaries. They also found that bipolar interfacial structures cause brittle intergranular fractures between polar sulfur-nickel structures that are disorderly aligned in two opposite directions.

Similar mechanisms may cause grain boundary embrittlement in other metal-nonmetal systems. Examples include oxygen, sulfur, phosphorus and hydrogen embrittlement of other metals and alloys. These are of broad technological importance.

This work further advances previous research by Luo’s group on the bismuth embrittlement of nickel, which was done in collaboration with Lehigh University and published in two subsequent reports in Science in 2011 and 2017. Researchers discovered that highly-ordered interfacial structures form at general grain boundaries in bismuth-doped nickel. In the new Nature Communications study, Luo’s group found that disordered bipolar interfacial structures form in sulfur-doped nickel.

Bismuth and sulfur are two well-known embrittling impurities for nickel. Interestingly, we found that these represent two extreme cases of interfacial structures—ordered versus disordered, respectively. Thus, they may be considered as two classic examples of grain boundary embrittlement with different underlying atomistic structures.

Aside from embrittlement mechanisms, researchers say this study sheds new light on the mysterious abnormal grain growth phenomena in sulfur-doped nickel, and enriches fundamental understanding of disordered interfaces. This study also challenges a traditional view by showing that the orientation of the grain boundary facet, instead of the misorientation, dictates the interfacial structure.

Luo is also affiliated with the Sustainable Power and Energy Center at UC San Diego, where he is working on materials related issues for both energy storage and energy efficiency