Home About Contact RSS GCC Twitter Newsletter
Gallup: 30% of all Americans use ride-sharing services; 45% of those aged 18 to 29
DOE finalizes rule to expedite approval for small-scale natural gas exports 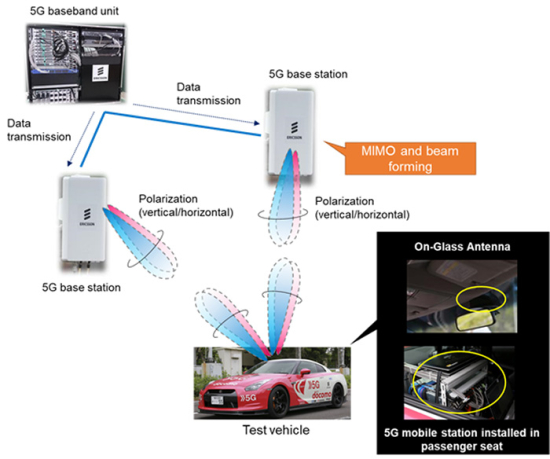 The 5G 28 GHz band compatible On-Glass Antennas used in the field trial were designed and developed by AGC. The antennas are not easily seen from the exterior and can be installed on glass surfaces without affecting the vehicle design.

Radio waves in the 28 GHz band have a large propagation loss and have difficulty propagating over long distances. By installing an On-Glass Antenna on the vehicle, radio waves above 6 GHz can be transmitted and received using the beam forming function, which concentrates radio waves in a specific direction, and the MIMO function, which improves communication speed by simultaneously transmitting different data from multiple antennas. This allows stable, high-speed communications even for vehicles in operation.

For this field trial, 5G high-speed communications using both the beam forming function and the MIMO function was performed with a vehicle equipped with On-Glass Antennas. The trial was held at the National Institute for Land and Infrastructure Management in Ibaraki Prefecture, Japan.

The trial was carried out at a straight section of test course approximately 2.2 km long at the National Institute for Land and Infrastructure Management. 5G data communications were carried out using the 28 GHz band between the moving test vehicle equipped with a 5G mobile station to which several On-Glass Antennas were connected and three 5G base stations set up along the sides of the course.

For this trial, a total of eight On-Glass Antenna elements were installed in the test vehicle on the windshield, both side windows, and rear window, so that radio waves could be received from various directions.

By utilizing the On-Glass Antennas to receive signals in combination with the MIMO function and the beam forming function with up to four beams supporting vertical and horizontal polarization, 5G high-speed communications were realized.

I am not sure what you need such high speed connectivity for.
Are you going to stream HD video to a car while being driven around ?
You should be able to download maps occasionally, typically when parked.
It looks like a solution looking for a problem to me.

It certainly makes it easier to spy on everyone in the vehicle.  It would be possible not just to transmit every word spoken, but capture every facial expression and flicker of the gaze.

Smile at a politically-incorrect statement on talk radio?  Gotcha, badthinker.

@EP, ok, but it still doesn't require 8GPs, or even 1 Gps.
You could transmit speech with say 50 Kbps and a facial expression with (say) 32 bits per person per second - not much at all.
Gaze flickers might be a bit unreliable.

I am sure they have all this in China already.
You could leave the car after a long drive with no social capital at all after a bad drive.

You can expect much more (not less) communication capabilities by 2035/2030.

The first (full) use is going to be for fully automated driverless vehicles. Other Video/Audio capabilities will be added benefits.