BorgWarner Exhaust Heat Recovery System for hybrids can improve fuel economy by up to 8.5% 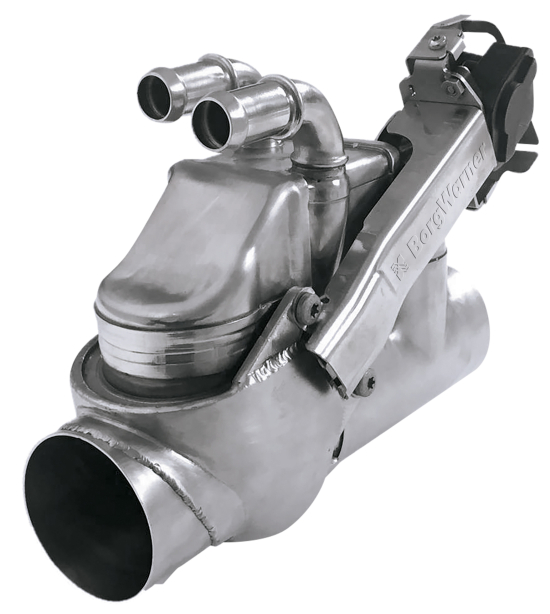 By using the heat from exhaust gas which would normally be diverted through the exhaust pipes and wasted, the technology reduces engine warm-up time and enhances efficiency, thereby improving fuel economy and reducing emissions. This cost-effective solution offers compact packaging, low weight and can easily be integrated into existing vehicles.

Until a cold engine reaches its optimal operating temperature, it is much less fuel efficient and generates higher emissions, which is one of the challenges to master for upcoming emissions regulations. Our EHRS minimizes engine heat up time, helping automakers around the globe meet new and more stringent regulations.

With the EHRS, BorgWarner serves the growing demand for highly efficient solutions to reduce emissions and strengthens its position as a leading supplier of clean technologies.

The EHRS reduces mechanical losses by using the energy conserved within the exhaust gas. During engine cold starts, a valve controls the exhaust gas flow, routing it through a heat exchanger, where the thermal energy of the gas heats up the vehicle’s subsystem fluids. As a result, the engine warms up faster.

This is such an obvious thing, not only for hybrids but for vehicles used in cold climates.  I wonder why it took so long?

Seems to be a very low cost way to consume less fuel and produce less pollution without apparent or known major damage to existing vehicles.

Could be one of the solution, specially for cold weather areas.

Wonder why Toyota is not using it (or similar units) on their excellent HEVs?

Toyota is using a system like this, and has been for 9 years or so, since the Gen 3 Prius came out (it replaced the coolant thermos system that the Gen 2 had).

You'd think everyone would want a cabin that heats faster, glass that clears faster, and everything else.  Not just the people who buy hybrids.

Seems like it would be good for plugin hybrid duty cycles, during which engine may do multiple cold starts.

Don't the PHEV test cycles start with the traction battery flat, so the cars are rated on their hybrid-mode fuel economy and emissions?  Testing-wise, it would be just like a regular hybrid.

The garden-variety hybrid shuts down the engine when halted or creeping in traffic, which allows the engine and catalyst to cool off.  The catalyst is a pretty big deal too.

Not a new concept, but I guess it needs to be added to the many "Bandaids" we have put on the internal combustion engine over the last 50+ years to make them cleaner.

Depends on your perspective.

The heart-pounding Chevy Camaro SS of 1968 had a horribly peaky 396cu.in. engine that developed a claimed 375hp V-8 in the golden days of unverified claimed crankshaft peak HP. With great skill it could be piloted 0-60 in 6 sec and drank premium leaded fuel at a rate of 12mpg avg, 8-10 in town, with a light foot. And BELCHED particulates, NOx etc.

The bottom-of-the-line Camaro today is a 2L (122cu.in.) 4cyl rated at 275hp, but which propels a car only 275 lb lighter (and MUCH safer) than it's half-century old counterpart 0-60 in 5.4 sec. Much lower octane unleaded fuel is burned at less than half the rate (20city/30hwy) in a much more rigorous test than the ad hoc methods of yesteryear.

Did I mention emissions are in some cases two orders of magnitude lower and engine life is much longer?

Band-aids? I would love to get Band-aids like this. I'd be dead-lifting 1200lb.

To avoid emitting the worst gasses, the vehicle should have to warm up in place before taking off.
As a bicyclist in a northern city, riding behind freshly started vehicles stinks.

@Engineer-Poet There was no legislation repairing manufacturers to do so.

There's no legislation requiring manufacturers to install heated seats or electric wing mirrors, but they sell them anyway.  Often they're standard equipment.  Buyers like them, even expect them.

Lots and lots of folks would love a car that warms up faster in winter.  I hope this catches on for that reason alone.

8.3% is a huge claim yet the article states it only helps warm the engine up. I have a 50 mile commute so the 2 minutes of warm up wont really translate into more than 0.3% increase...what am I missing here??

@dursun
This is also what I have understood. In the US FTP testing, the soak period before cold start is too long for this device to have any effect and in the hot start, the engine is already hot and there is no further potential gain. In "normal" operation, however, we can anticipate some gain. Nevertheless, 8,5% is probably the upper limit and the average improvement will most likely be significantly lower.

@Peter_XX: This isn't like the coolant thermos on the Gen 2 Prius, though. It merely extracts heat from exhaust gases, so in any test cycle with a sufficiently long cold soak, it'll help. (It's too short cold soaks that it won't help.)