Ford has released the first images of the new Territory, a mid-size SUV targeted at new buyers in emerging cities in China. Ford developed the Territory together with its joint venture partner, Jiangling Motors Corporation (JMC). 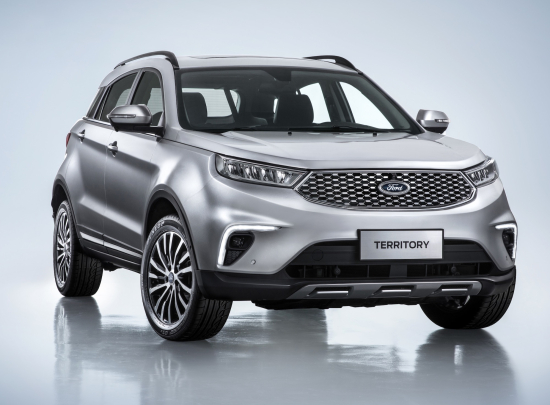 Territory customers can choose between a fuel-efficient gasoline engine option; 48V mild hybrid with Miller-Cycle technology; and a plug-in hybrid powertrain when it goes on sale in early 2019.

The Territory is a breakthrough for Ford in China in terms of our ability to successfully compete with Chinese automakers for millions of customers that we do not currently serve. Territory is a key proof point for how we will grow in China. We brought Territory to market with speed, high quality and cost efficiency. It will be affordable for young families and new buyers across China, not just the coastal mega-cities. And the technology will delight customers.

Market background. While China remains the world’s largest automotive market, the greatest growth in demand for automobiles will come not from traditional Tier 1 cities such as Beijing and Shanghai, which have implemented license plate restrictions to manage traffic congestion, but rather from smaller but fast-growing cities in the interior of the country.

For these buyers, the midsize SUVs such as Ford Territory is a highly popular choice. According to McKinsey’s China auto consumer survey 20172, the midsize SUV segment saw an annual growth rate of 38% in China between 2012 to 2016. Indigenous Chinese automakers in particular have capitalized on this trend.

The new Ford Territory is part of Ford’s China 2025 plan to launch more than 50 new vehicles in the country by 2025.

Ford is going all CUV/SUV and the Mustang soon.