The California Air Resources Board has released the 2018 issue of its Annual Evaluation of Fuel Cell Electric Vehicle Deployment and Hydrogen Fuel Station Network Development, pursuant to the requirements of AB 8 (2013). This report is the fifth annual publication.

The EO additionally sets a target for 5 million ZEVs by 2030; FCEVs are expected to represent a significant portion of this future ZEV fleet. 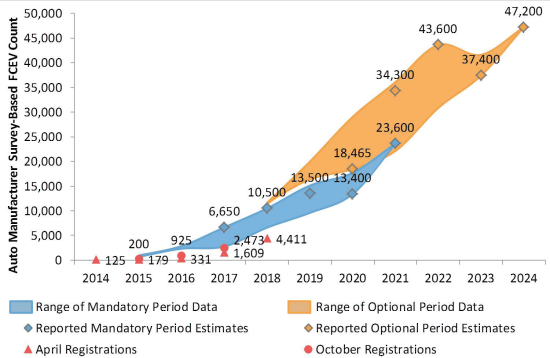 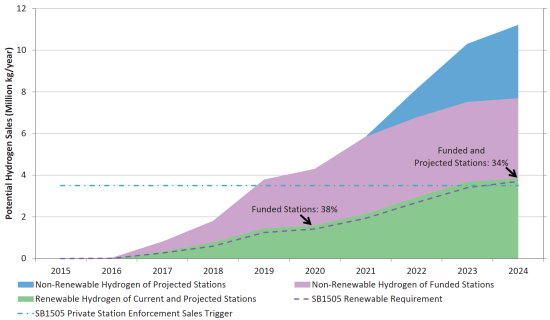 However, CARB notes, these volumes are not yet large enough to exhibit a clear pathway to meet a 1,000,000 FCEV target by 2030.

As the analyses of this report indicate, the culmination of these recent developments is a refreshed vision of California’s hydrogen transportation future. This new vision builds on the extensive experience gained within the state and acknowledges the potential for long-term industry development goals. Due to these demonstrated successes and continued State support, there has been an inflection point in the conversations around hydrogen fuel and FCEVs within California. The consensus outlook from industry and public stakeholders is increasingly positive, and California stands well-positioned for FCEVs to step into the role they must ultimately play in order for the State’s long-term GHG reduction goals to become a reality.

In my view ULEMCo's diesel/fuel cell hydrogen hybrids for delivery vehicles present a considerable opportunity to encourage the provision of hydrogen infrastructure:
http://www.greencarcongress.com/2018/08/20180801-ulemco.html

It is a lot of bang for the buck in reducing pollution and carbon emissions.

Much of the high cost of hydrogen at car filling stations is due to low volume, and where volume is higher such as at this bus depot costs are competitive with diesel:

“Much of the high cost of hydrogen at car filling stations is due to low volume, and where volume is higher such as at this bus depot costs are competitive with diesel:”

Please re-read critically the article you linked to. The depot had had a single bus for two weeks. If a single bus kept their $1,900,000.00 station busy then they have bigger problems than the cost of H.

The article is obviously in error. It states the cost of H was $4.50 per kg. What they probably meant was that the cost equivalent of H with diesel was $4.50 per gallon. A reporter that knows nothing about what they are writing about could easily make that mistake. We should know better. Moreover they would be referencing wholesale prices rather than retail as they are a private station.

That article was from Dec 2016. Here is an excerpt from the Ca alliance of fuel cell partners;
Hydrogen fuel prices range from $12.85 to more than $16 per kilogram (kg), but the most common price is $13.99 per kg (equivalent on a price per energy basis to $5.60 per gallon of gasoline),

That is based on a CEC report from 2015 which may have been from data from 2014. It is likely they haven’t updated it because retail prices at the busier stations in Ca are still over $16 per kg.

'As for the approximately $1.9 million hydrogen pumping station at SARTA’s Gateway headquarters in southeast Canton headquarters, it’s operational, said Conrad. A 9,000-gallon tank holds liquid hydrogen at extremely cold temperatures. A vaporizer converts the liquid hydrogen into gas where it’s stored in underground tanks and then it’s pumped into the hydrogen buses with fuel dispensers. The pumping station can support up to 20 vehicles. A bus can hold 50 kilograms of gas. The hydrogen is shipped from Air Products’ hydrogen plant in Ontario.

It takes about 2 therms of natural gas to make a kg of H2,
NG is selling at less than 40 cents per therm wholesale.

Based on mpge, H2/FCEVs already meet the combustion fuel equivalent cost of gasoline and/or diesel. With more H2 stations and lower H2 price and many more FCEVs, H2 equivalent price per miles travelled will come below diesels and/or gasoline cost.

It is just a matter of time before FCEVs become more economical than ICEVs to use. Near future FCEVs will have over 500 Km all weather range and will compete with equivalent ICEVs, HEVs, PHEVs and BEVs.

Diesel and gasoline ICEV vehicles average fuel consumption has been flat or increasing for the last 4 years or so. Too many large pick-ups and SUVs are the main reasons.

The end game for a health environment is to replace fossil fuels with clean energy. Ideally, I would like to see that accomplished with solar panels, wind turbines, hydro plants, battery storage and battery electric vehicles, etc., all clean energy generators. But, unfortunately that is wishful thinking in this current Republican political climate. Perhaps intermium measures will assist in actually getting to a clean planet faster. These include hydrogen fuel cells and hydrogen fuel made from reformed fossil gases.