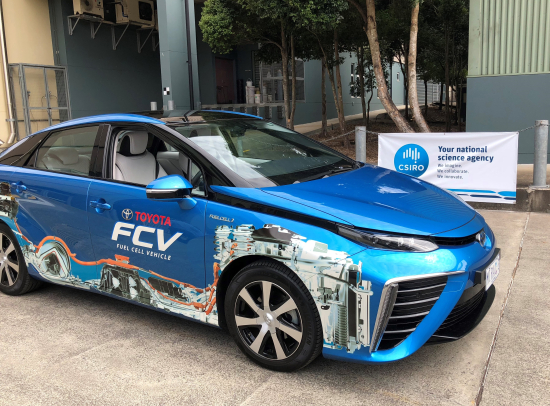 Ammonia (NH3) has high capacity for hydrogen storage—17.6 wt.%, based on its molecular structure. CSIRO developed a thin metal membrane that can separate high-purity hydrogen from ammonia used as a hydrogen carrier, while blocking all other gases.

The technology can open the pathway for bulk hydrogen to be transported in the form of ammonia, using existing infrastructure, and then reconverted back to hydrogen at the point of use. The membrane links hydrogen production, distribution and delivery in the form of a modular unit that can be used at, or near, a refueling station.

CSIRO’s vision is that the membrane separation technology has the potential to fill the gap in the technology chain to supply fuel cell vehicles around the world with low-emissions hydrogen sourced from Australia.

Following this successful demonstration, the technology will be increased in scale and deployed in several larger-scale demonstrations in Australia and abroad.

The project received $1.7 million from the Science and Industry Endowment Fund (SIEF), which was matched by CSIRO.

In addition to its membrane technology, CSIRO is applying its expertise to all stages of the hydrogen technology chain (including solar photovoltaics, solar thermal, grid management, water electrolysis, ammonia synthesis, direct ammonia utilization via combustion and/or fuel cells, as well as hydrogen production).

Mirai - the ugliest car since the Pontiac Aztek, Yugo, and VW "Thing".

Using the existing Ammonia infrastructure might be a solution to creating an H2 infrastructure and this looks like one way to use it.
However, today traditional Haber-Bosch ammonia plants use natural gas feedstock to perform a steam methane reformation (SMR) to make ammonia.
The Haber-Bosch process requires eight steps: the first seven steps are all concerned with reforming natural gas (hydrogen production and clean-up) and preparing the feedstock (compression), only the final step is the actual Haber-Bosch (ammonia synthesis).
There are alternatives to SMR Haber-Bosch process. One method would be using Electrolysis to create the hydrogen. Though SMR is currently cheaper except in places like Norway. Recently GCC had a post about ThyssenKrupp technology for "advanced water electrolysis" (http://www.greencarcongress.com/2018/07/20180728-tk.html).
This will be used at a demonstration plant in Port Lincoln, South Australia.
Of course the holy grail would be Direct Electrolytic Ammonia Production using only Air and Water though this is still in early stages of development, e.g. https://www.nwo.nl/en/research-and-results/research-projects/i/58/28558.html.

So the way to get carbon free H2 is by regulation a price on carbon to kickstart the industry and bring on renewables.
Why hasn't anyone thought of that?

In what way is this "Green"

Maybe I was not clear enough about how the CSIRO Membrane Technology to convert Ammonia to hydrogen was a "Green" process.
Today the answer of course would be NO.
However, the Ammonia industry is making every effort to convert this valuable chemical to a "Green" process. Yara, the world's largest ammonia producer, has many Electrolytic Ammonia plants that use Hydro generated electricity (they were originally part of Norsk Hydro). Yara intends to build a demonstration plant to produce ammonia using solar power, near its existing world-scale plant in the Pilbara, in Western Australia in 2019.
Electrolytic Ammonia production can be cost competitive today with Natural Gas SMR Ammonia, if a low cost source of renewable electricity is available.

One final note. I still think Fuel Cell technology if it ever does take hold will be limited to a few areas, e.g. long range Class 8 trucks where large H2 tanks and cost would not be a problem. Besides would rather have a Tesla Model 3 or a Toyota Mirai (they are about the same cost).

gryf
Thanks for some informative posts in this thread.

I would disagree though about the likely future costs both in money terms and in environmental impact of big battery long range BEVs relative to FCEVs.

The very high embodied energy in batteries make them at least with anything like current chemistry of dubious benefit, nowhere near as cost effective as a plain hybrid car for instance.

Toyota reckon they can bring the cost of FCEVs down to about the same premium over plain ICE as any other hybrid by around 2025.

There are no breakthroughs needed and betting against Toyota production engineering has not got a good track record.

Davemart
FWIW my professional and academic background is in Manufacturing System Engineering. I have been involved with the Toyota Production System since the 1980s. When I review a technology I look at all of it's aspects, i.e. engineering complexity, system efficiency, and supply chain considerations.
There appears to be a global consensus in the automobile industry that vehicle electrification will be in all vehicles. It is too early to bet on which technology - HEV, BEV, PHEV, or FCEV will dominate and it is not worth promoting one over the other.

We have interesting years ahead. Toyota is clearly getting us ready for fuel cell vehicle, which inherently need a lot of low temperature heat exchangers. Whooooaaaaa....hard to get used to those massive grills!!

The best of both worlds may be to combine Batteries and FCs in a hybrid vehicle. The relative size of the battery pack and FC could vary with the vehicle size and end user needs.

Smaller fuel cell with lots of batteries is the idea.
The FC is the range extender in a plug FCEV.

Is there any hazardous waste left behind in these processes?