Nexcel’s active engine oil management system is an easy to change unit containing engine oil, a filter and an electronic control unit. The plug-and-play oil cell is designed for flexible installation anywhere in a vehicle’s engine bay via a docking station. Nexcel is an automotive start-up that combines Castrol’s knowledge of lubricants technology with BP’s focus on growing businesses which support customers in reducing their emissions.

Nexcel offers a solution for engine designers aiming to reduce CO2 emissions in both hybrids and pure internal combustion vehicles. The anticipated cost for each gram of CO2 saved with Nexcel is around €42 (US$49), similar to the cost per gram of CO2 for a micro hybrid (stop-start plus regenerative braking) and approximately half the cost per gram for one of the most popular new technology strategies, a mild hybrid system. 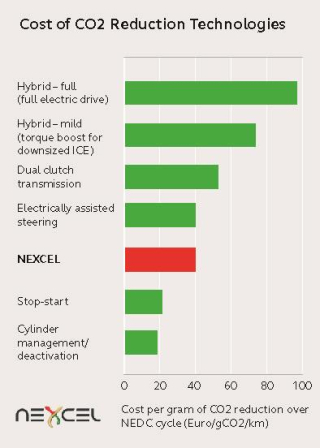 Emissions improvements have been recorded across several popular engine types, including conventional 2.0-liter gasoline, downsized 2.0-liter gasoline with GDi, and 2.0-liter diesel. The most substantial improvement was seen on the downsized, turbocharged gasoline engine, an architecture that is predicted to be one of the most important as the industry moves to smaller, more highly-stressed spark-ignition engines with or without electrification.

Being able to plan for a precise oil-engine match throughout the life of an engine opens up new possibilities for engine designers to reduce CO2. By ensuring that an engine uses the same lubricant throughout its life, designers may be able to use smaller, more efficient bearings and higher loads, without having to compromise how far they can go. With Nexcel, an electronic handshake automatically confirms the correct oil and filter every time the oil is changed.

Engine warm-up is also growing in importance. Even in the Worldwide Light Vehicle Test Procedure, a significant proportion of the measurement is conducted with the engine at less than optimum operating temperature, which means it is producing more CO2 than when up to temperature. Every liter of oil in an engines sump has a heat capacity equivalent to around 2 kg of aluminum or 4 kg of cast iron, so by removing oil to the cell when it isn’t needed, Nexcel can help engines reach their optimal temperature sooner.

A further area of opportunity is that the effectiveness of lubricants falls as they are used due to additive depletion. To ensure there are sufficient active additives at the end of increasingly long service intervals, oils must be specified with a higher additive content than is required through most of its life. This pushes up the oils’ viscosity and can therefore increase emissions. The Nexcel system aims to change the rules by boosting the oils’ additive content in-between services, preserving its effectiveness.

Nexcel is a self-contained, sealed cell that includes the correct grade of oil and specification of filter. Designed for flexible installation anywhere in the engine bay via a docking station, it is managed by a dedicated electronic control unit that communicates with the vehicle via the standard databus. An electric pump controls the flow of oil between the engine sump and the remote cell. Changing a Nexcel oil cell takes around 90 seconds and can be accomplished from the top of the engine bay without any mess or special equipment.

Well, there goes the oil-change business.  Most people will just buy the proper cell and swap it out themselves.

Our market research indicates that, even with Nexcel, most people would still prefer a workshop professional to carry out an oil change. They are just looking forward to an increased number of more convenient servicing options, including mobile servicing!