Volkswagen I.D. R Pikes Peak produces around 20% of its own energy requirements via recuperation

For a fully-electric racing car like the record-breaking Volkswagen I.D. R Pikes Peak (earlier post), the weight of the battery is especially important—it is the heaviest individual component, and each increase in weight has a detrimental effect on the car’s performance. 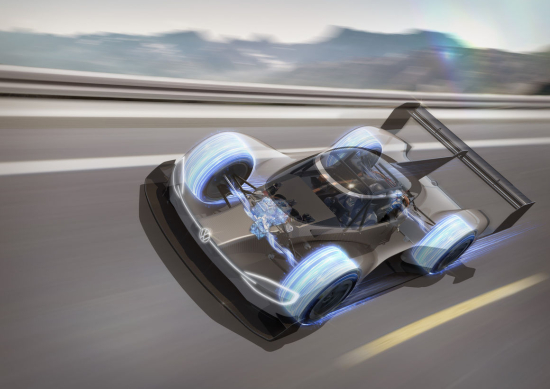 Volkswagen Motorsport engineers sought to keep the batteries as small and light as possible in the record-breaking car. In addition to the weight-saving lithium-ion design, they relied on technology that is already implemented in numerous electrically-driven production models: recuperation.

In a conventionally-driven car, much of the energy generated by braking is converted into heat and is lost. In an electric car, this energy flows back into the battery packs. The I.D. R Pikes Peak itself produces part of the electrical energy required for the two motors, which generate 500 kW (680 PS).

This allowed us to reduce the dimensions of the batteries and keep the vehicle weight, with driver, well under 1,100 kilograms.

However, the Volkswagen Motorsport engineers had not yet had any experience with recuperation. They were supported by the technical departments for e-mobility at the parent company in Wolfsburg and at the Volkswagen Preproduction Center (VSC) in Brunswick.

To make the learning process easier, Volkswagen Motorsport first installed an electric drivetrain in a Golf GTI TCR from touring car racing. This experimental vehicle was used a mobile laboratory at the Volkswagen test site in Ehra-Lessien. The focus was on recuperation.

As we were not able to test on the original circuit at Pikes Peak, we compared the data harvested from the converted TCR race car with the data produced in the simulator at Volkswagen Motorsport. We had programmed the whole track as a model in the computer.

The simulations were used to answer an important question: what portion of the energy required during the race will be produced by the on-board systems in the I.D. R Pikes Peak? A high percentage requires large generators, while big batteries need a correspondingly lower percentage—both options mean extra weight on board. The team finally settled on 20% as ideal, said Wrzuszczak.

The engineers also worked on another challenge in the simulator and during test drives. Regardless of whether it’s a race car or a production vehicle, the driver should barely notice the recuperation process and it should not have any effect on braking. The balance between the mechanical brake and the braking effect of the electric motors, which work as generators during deceleration, is decisive.

The interplay between recuperation and braking is controlled by the on-board computer in the I.D. R Pikes Peak, said Wrzuszczak. Racing cars have far more extreme objectives than production cars, and the software is programmed much more aggressively. However, the production car also has to deliver the best braking feeling for the driver, make use of coasting phases and ensure that the battery recharged effectively without surges.

One factor that had to be taken into account was limiting recuperation with a fully-charged battery right after the start, added Wrzuszczak. Energy management towards the end of the 19.99-kilometer race was also a complex task; with a racing car that uses a combustion engine, weight concerns mean that crossing the line with a near-empty tank is ideal.

We had a different task with the I.D. R Pikes Peak. Batteries that have nearly completely discharged do not perform as well. That is why our strategy was to avoid the charge level dropping below 30 percent, even just before the finish line.

The recuperation strategy applied during the record-breaking performance of the I.D. R Pikes Peak provided more data for the development of the first fully-electrically driven production cars from the brand.